TRENTON – A stand-off threatens to intensify between Democrats worried about Gov. Chris Christie’s plans for the Access to the Region’s Core (ARC) tunnel and the governor, who has temporarily waved off the $8.7 billion ARC construction against a backdrop of an insolvent state Transportation Trust Fund (TTF).

“As you are aware, we have stopped any new work on the project for the last 30 days while we renew the project’s viability,” James Weinstein, executive director of New Jersey Transit, told Assemblyman John Wisniewski (D-Sayreville) and Wisniewski’s transportation committee. “The project team will evaluate… and I will deliver a recommendation to Gov. Christie.”

The governor has insisted, Weinstein said, that “the cost of the ARC project ($5.5 billion in federal money and $3 billion in port authority funds) cannot exceed what has been budgeted.”

“It was made clear to me from the governor right from the start,” he added. “…We’re not in flush times. We’re taking a hard look at that. Mega projects are called mega projcts becasue there are risks involved. There are differing views on what the quantification of what that risk is.”

Wisniewki asked Weinstein if he believes in the need for increased capacity as conceived by the ARC project.

“It’s an important project,” the director said. “Whether this is the time and the place is part of the process we’re involved in. …The state is facing a ($10 billion deficit) for the second year in a row.”

Then the chairman accelerated his offense.

“Have there been discussions about using this money (roughly $2 billion in state funds) for the trust fund?” Wisniewski wanted to know.

“I don’t want to say,” Weinstein said. “There are discussions about a broad range of alternatives. The forumula for the trust fund remains to be seen.”

Wisniewski asked the question again. Has New Jersey Transit considered re-routing state funds that would have been used for ARC for TTF?

“There have been those discussions,” Weinstein admitted, “but no decisions.” 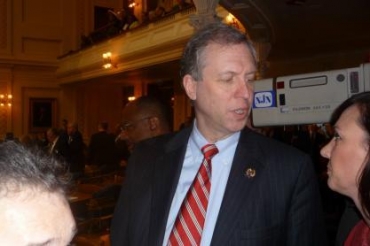