With the NJSEA’s deep debt already documented in the Hanson Report, Robinson has been taking his lumps in front of the Democratic legislators today.

“I just want to know why we haven’t been more aggressive in the southern part of the state?” Van Drew asked.

Robinson said the last site targeted was in Bayonne, but it’s on hold by the state. The last three OTWs fell through in other targeted sites.

He asked the panel to help with “legislative tweaking of the (local) approval process.”

“We don’t want to invest $10 million and not be able to support it,” Robinson said.

The NJSEA sometimes gets biased as benefiting the northern part of the state more than anywhere else, but state Sen. Paul Sarlo (D-Wood-Ridge) had Robinson clear that up.

Robinson said $315 million went to Atlantic City, $35 million to the Wildwood Convention Center, and funding was provided for Rutgers Stadium.

“So greater than 50 percent (of the debt) is from (outside of the northeastern part of the state)?”

The counties with the highest unemployment rates are Atlantic, Cape May, and Cumberland, Van Drew said, and the south needs help – not gaming in the north.

“It will devastate and entire industry,” Van Drew said, enabling “cannibalizing” competition within the state. 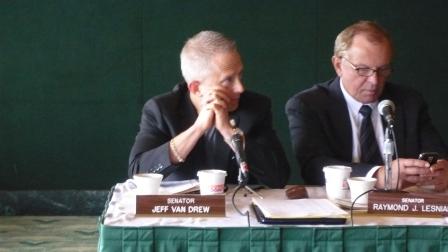