Last Tuesday in the Sheraton New York Hotel & Towers on West 53rd Street, just after lunchtime, Jamie Dimon made a joke. “I put this next slide in, the next one, for fun,” the JPMorgan chief executive told his audience at the Barclays Global Financial Services Conference, clicking to page 18 of his presentation. A terrible mass of regulatory spaghetti popped up on the screen in vomit yellow and two shades of green, dotted and straight lines crisscrossing from top to bottom. “This is our regulatory system,” he explained, as laughter broke out. “It–” he started, but his audience was applauding.

By that morning, all around town, Dinesh D’Souza’s Forbes cover story had begun making the rounds. “Barack Obama is the most antibusiness president in a generation, perhaps in American history,” it opened. “Critics in the business community–including some Obama voters who now have buyer’s remorse–tend to focus on two main themes. The first is that Obama is clueless about business. The second is that Obama is a socialist,” he said. “These theories aren’t wrong so much as they are inadequate.” It’s that he’s an anti-colonialist, the Forbes cover story explained, just like his father, a “philandering, inebriated African.” (See Lee Siegel’s take on the piece here.)

Fury has been flourishing lately. Professor Todd Henderson, a former McKinsey man now at the University of Chicago Law School, where Obama taught from 1992 until his election to the Senate in 2004, wrote a widely read essay that detailed the unacknowledged struggles of living on hundreds of thousands of dollars. “Life in America is wonderful, but expensive,” he explained. On CBS, Ben Stein said the president’s tax proposals would reprimand him for success: “When did it turn out that was a crime to be punished?”

Blackstone’s Steve Schwarzman registered the same kind of complaint, only more floridly, when he compared the proposal to close what’s known as the carried-interest loophole to Hitler’s 1939 invasion of Poland. As it stands, that rule taxes the money that private-equity executives make as if it were capital gains, not income. Mr. Schwarzman apologized last month. “However,” he said, “the fundamental issue of the administration’s need to work productively with business for the benefit of the overall economy is still of very serious concern.” Two weeks later, in a letter to investors, the hedge fund star Dan Loeb likened the president’s tax policies to the violation of “constitutionally guaranteed protections against persecution of the minority and an inexorable right of self-determination.”

And even before the president’s sporadically astonishing town hall meeting hosted by CNBC on Monday, Paul Krugman dedicated his column to the anger of businessmen, diagnosing belligerence, blood lust and self-righteousness. But that isn’t exactly right. What’s been blossoming, according to interviews with senior executives from four of the major New York financial institutions, is a very different king of rage.

Bankers are offended. They speak of betrayal. Feelings have been hurt.

ON MONDAY AFTERNOON, a sturdy-looking man with well-combed hair and a good suit stood up in front of the president. Anthony Scaramucci was a vice president in private wealth management at Goldman and a Lehman Brothers managing director before he started a hedge fund that, as he told the president, has “$7.4 billion under management.” Another program on CNBC, Untold Wealth: The Rise of the Super Rich, once showed him waking up at dawn in a Long Island mansion decorated by a jumbo gold harp. “I also went to law school with you,” he told the president this week.

“If I fouled you on the hoop court, it wasn’t intentional,” Mr. Scaramucci said, for some reason. He has the air of a prosperous brother-in-law.

“I remember that!” the president said. Everyone laughed.

“You would remember if I fouled you,” Mr. Scaramucci said. Chuckles faded. “I’ve got a low center of gravity.” The president did not respond. “The question I have, sir,” he continued, “and this is something I really, you know, a lot of my friends are thinking about. Listen, I represent the Wall Street community. We have felt like a piñata. Maybe you don’t feel like you’re whacking us with a stick, but we certainly feel like we’ve been whacked with a stick,” he said. “When are we going to stop whacking at the Wall Street piñata?”

“There is a big chunk of the country that thinks I have been too soft on Wall Street,” the president answered, before discussing hedge fund pay and tax problems, like carried interest.

“I didn’t see any olive branch,” Gordon Bethune, the former Continental Airlines CEO, and a current board member at Prudential Financial and Willis Group, said on CNBC afterward. “I’m looking for one, but I didn’t see it.” The reason why executives like Mr. Scaramucci and Mr. Bethune were not reassured, and were looking for reassurance in the first place, has something to do with a question that had come a little bit earlier. “There are some people in business who think, to use a phrase that you used recently about your critics, you talk about them like dogs,” moderator John Harwood had told the president.

“We haven’t increased taxes on businesses. Actually, we have instituted about 50 tax cuts, many of them going to businesses large and small,” he answered. He reminded his audience that income taxes are lower than they were under Reagan, and Eisenhower, too.

But there is a difference between a question about insults and emotion and an answer about policy. “I think of it first as a language issue,” a managing director at one of the largest private-equity firms in the city complained, when asked to explain the anger at the administration. “The language they use is the language of villainy and populism.”

MR. HARWOOD HAD said that Wall Street felt Obama treated them like dogs, but he’d mixed his metaphors. “He went on 60 Minutes and said ‘fat cat bankers,'” one of the four senior executives The Observer talked to complained. “He didn’t say Dick Fuld or Ken Lewis, he just said ‘fat cat bankers.’ Meaning all bankers are fat cats. And we have over one million bankers in this country. And they’re all taxpayers.” That interview was in late December, after the year’s huge bonuses were announced. Later on in the interview, the executive, who watched the CNBC town hall but, exasperated, had to turn the sound off after five minutes, came back to the slur. “He just said that we are all fat cats! All of Wall Street! He said ‘fat cat bankers.’ He said ‘fat cat,’ he’s doing name calling, stereotyping, which is pretty amazing.”

Back during the second month of the administration, writing in New York magazine, Gabriel Sherman documented the anxious rage of a privileged class that was unsure of what to expect. What has happened to Wall Street under Obama, though, has not been bad at all. But never mind the death of the Brown-Kaufman amendment, which would have limited the size of the nation’s mega-banks; or the softened Volcker Rule; or Goldman Sachs’ record 2009, followed by a quarter this year when Bank of America, Citigroup, Goldman and JPMorgan made a trading profit every single day; let alone the administration’s satisfaction with the new Basel III rules on leverage and capital ratios, which were much laxer than they would have been without the banks’ massive global lobbying effort.

“We’ve been ostracized,” another source said. “I went to jury duty about a year ago, and when I said I’m in investment banking, the people in the jury room were making ugh sounds, and I’m like, fuck you. I’m proud of what I do. And I think this firm did a lot to get the recovery going. Somewhere ranked below a pimp and well operator is not right.”

A White House spokesperson did not comment. But Wall Street’s emotions have consequences. “If, as a result of this anger, credit becomes unavailable, particularly for small and mid-size businesses,” Mr. Schwarzman wrote in The Washington Post this year, before his Poland blunder, “then at best the economy will slow and, at worst, we will find ourselves in a dire situation.” He said bankers felt under siege and were responding by “becoming conservative,” a lovely little pun about lending and politics.

“He’s pissing on us and Wall Street and bankers and capitalism; then we have gotten afraid,” the executive who turned CNBC on mute said. “We then are not investing in maybe what we should invest in.” 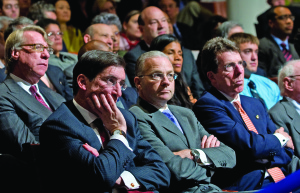