The Republican candidate for the U.S. House of Representatives in the 12th District scored a nice get this week as Trenton City Council President George Muschal threw his weight behind the challenger.  While a council president’s endorsement generally won’t sway an election in either direction, a white collar Republican gaining the backing of an urban council member can easily be considered a coup.  The endorsement is all the more impressive given the demographic diversity of the district that includes both portions of Trenton and the Princetons.

The Democrat from Bayonne was sworn in this week to replace disgraced Assemblyman Tony Chiappone.  Chiappone pleaded to guilty to filing false campaign finance reports with the Election Law Enforcement Commission.  The family man and fireman has been a loyal party soldier and this is his pay off.

The Tea Partier from Delaware by way of Moorestown in Burlington County pulled off an upset in that state’s primary, defeating establishment GOP-backed U.S. Rep. Mike Castle.  O’Donnell pulled in a last minute endorsement from Tea Party darling Sarah Palin, a trump to Castle’s own endorsement from Gov. Chris Christie.  Pundits give O’Donnell little chance to win the general election, but her victory gave hope to New Jersey’s own Tea Part Cinderella story, Anna Little.  One Republican insider summed up the feeling after O’Donnell’s victory this way.  “I’m not making any predictions. After that, who knows what can happen.”

It’s probably little consolation a year after his failed gubernatorial bid, but the Americans for Prosperity chieftain in this enivornment might have won a Republican Primary in New Jersey. Just look at what happened in Delaware, where Lonegan campaigned personally for the winner of Tuesday night’s contest.

The Adler camp was involved in an embarrassing altercation this week when a campaign volunteer was caught photographing Republican challenger Jon Runyan’s home.  Runyan said his daughter was outside while the Adler volunteer was clicking away.  Adler staffers protested loudly that the volunteer was on public property and took no pictures of the girl or any member of the Runyan family.  Still the fact remains the incumbent sent a guy with a camera to Runyan’s home, which in a lot of places would have earned him worse than a police report and some embarrassing press.

Lofton was at the wrong end of a firing squad of sorts this week as he sought to explain the failures within the Trenton School District to irritated legislators eager to draw blood.  Dissembling by Lofton, who presided over a district that spent millions to send special needs students out of the district without the approval of the school board, and others under his command did nothing to blunt the ire of State Sen. Teresa Ruiz, who did a nice job of keeping the targets off balance.

Mayors and Superintendents of New Jersey’s Municipalities and Schools

When the cap on property tax hikes was passed last summer it was celebrated by supporters as a giant step toward fiscal solvency for the state’s 566 municipalities and more than 600 school districts.  But many warned that without the so-called “tool kit” of bills that were to go along with the cap to make it possible, it would be a failure.  Fast forward 2 months and the tool kit bills are so far languishing.  The assembly has yet to hold hearings on any of them, which has Republicans howling.  If the tool kit never sees the light of day, the cap that was passed with so much promise will be a yoke around the necks of the school and municipal leaders, who will be forced to resort to mass layoffs and slashed programs to stay underneath it.

In an appearance before Assemblyman John Wisniewski’s (D-Sayreville) committee on Thursday, the bullet-headed Department of Transportation commish made a case for privatizing his department by providing no specifics and in the process running headlong into Wisniewski, who all but got Simpson to admit that he’d sooner privatize for more money than retain in-house services at less cost. 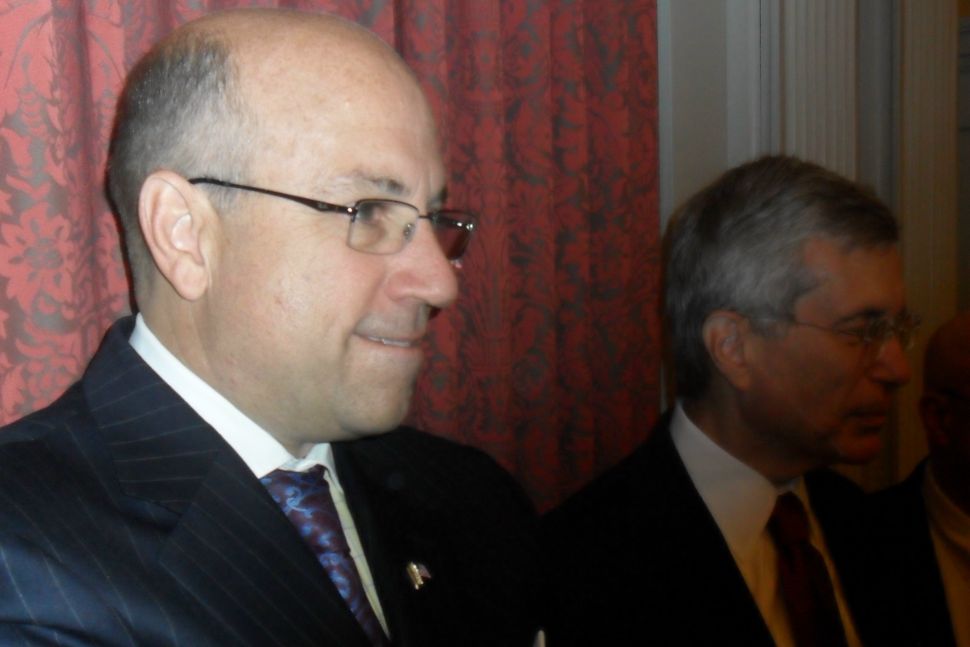