In her quest to become Bergen County Executive, the Republican county clerk secured the endorsement this week of the Sierra Club, and read a Bergen Record expose on pay-to-play trouble emanating from The Bergen County Improvement Authority, an agency that has already made headlines with the indictment of its former chairman.

Backed up by his security detail in a move that would have made Codey proud, Triceratops gored a heckler at a California rally for GOP candidate Meg Whitman to up his tough guy profile nationally. He also diffused a Senate Democratic Party attempt to exert subpoena power on his administration and – in a big nod to labor – appeared at the Bayonne Bridge to announce a jobs-creating project years in the making. But maybe most notably, Christie managed to re-route his nationwide Republican tramping tour, and horn in on a stage with Oprah Winfrey and Newark Mayor Cory Booker, territory once occupied solely by rising star Booker. Did we mention that Booker, of course, is generally regarded as the Democrats’ best shot against Christie in 2013?

A rising star in his own right, the chair of the Hudson County Democratic Organization and ex-hero cop became mayor in a Bayonne downward cyclone. But this week’s green light on the Bayonne Bridge widening project places the mayor at the heart of a 270,000-job extravaganza.

Inevitably criticized as chair of a party regularly pummeled by Christie, Wisniewski seldom gets challenged on his cross-examination skills. For the second straight week, the chairman of the Assembly Transportation Committee was able to pursue a line of questioning that forced a critical answer. In this case, Wisniewski quizzed the NJ Transit chief on whether NJ Transit was considering re-routing state ARC (Access to the Region’s Core) funds to the transportation trust fund. “There have been those discussions,” Jim Weinstein admitted.

If Jon Corzine had still been governor, the mayor of Newark would have been able to crowd him off the Oprah set just by cracking a smile. But now the electric Booker must share a stage with Republican rock star Christie, who serves as ultimate overlord of the $100 million that Facebook maven Mark Zuckerberg dropped on Newark this week. Zuckerberg’s airlift and the Oprah cameras definitely enable the mayor to record a victory – particularly on the same week – the same day even – that his opponent in this year’s mayor’s race wound up under FBI lamps. It’s just that now the Cory story comes with its own set of irritating political handcuffs, which link everything the mayor does to the Governor’s Office.

What’s wrong? Reporters and running mates wondered as the former Essex County prosecutor produced a snore campaign effort against incumbent Newark Mayor Cory Booker. It turns out Minor – who was arrested by the FBI this week on charges of bribery and obstruction of justice – had already received a subpoena and testified in his case and made statements to a grand jury going back to January of this year.

The former Essex County Superintendent of Elections pleaded guilty this week to tampering with public records. According to the state Attorney General’s Office, Casciano altered – or ordered subordinate employees to alter – documents or record-keeping data.

See the inverse of Kathe Donovan, above. On a terminal skid with Bergen Record coverage, the county executive ate another loss this week when the paper revealed multi-million dollar pay-to-play strategies at the Bergen County Improvement Authority. McNerney also found himself on the receiving end of a stinging rebuke from the Sierra Club as the New Jersey chapter endorsed Republican Donovan.

Senate Minority Leader Barbara Buono (D-Metuchen) tried to get subpoena power to determine exactly how the Christie administration muffed $400 million in Race to the Top dollars. State Sen. Shirley Turner (D-Lawrenceville) found herself overwhelmed by a Gov. Chris Christie/Steve Adubato/state Sen. M. Teresa Ruiz (D-Newark) power troika as she provided the lone “no” vote in committee to try to stymie Ruiz’s bill expanding approval authority for charter schools. And state Sen. Loretta Weinberg (D-Teaneck) failed to get a supermajority to override the governor’s veto of $7.5 million in family planning funding.

The state Joint Legislative Committee on Ethical Standards Tuesday tabled a request from the Republican assemblyman from Wayne for an opinion on an alleged conflict of interest stemming from his appearance before a state agency as chairman of the board of a non-profit.  Rumana is likely to get the opinion in his favor but not before the committee hears the complaint against him.  Comments from the committee members indicate they are not convinced that no conflict exists. 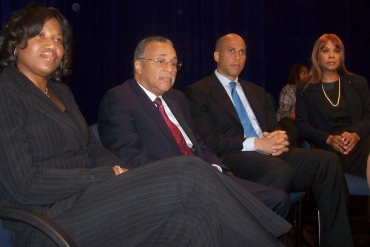