He almost came off this list when a teacher challenged him and he went to war again publically with his inner school child, sarcastically telling Marie Corfield in a roomful of friendlies to “have a great day,” an utterance that every rookie cop studiously avoids in exchanges with the public as a matter of professional dignity. But whatever he lost on style points, the governor more than made up for substantively as he unveiled an ambitious ethics reform package, in part targeting elected officials. Some lawmakers dismissed his proposal as retreaded material from the Corzine years. But this guy ain’t Corzine.  A story on Politico outlining Christie’s upcoming nationwide tour to stump for Republican candidates, had pundits and press abuzz at the possibility of a Christie headlined presidential ticket in 2012.  Christie’s national profile, already large, was further burnished by that story and others that followed which painted a vivid picture of the Gov’s popularity.

While other Democratic incumbents try to maintain stiff upper lips and project aloof confidence in the face of an invigorated Republican Party, U.S. Rep. Steve Rothman (D-Fair Lawn) can actually hit the snooze alarm on his own 9th District re-election campaign. With a Republican challenger who’s alienated by his own party, Rothman is almost in Donald Payne territory in terms of not having to break a sweat. Of course, the GOP hopes that’s exactly what Rothman does, as his hyped-up presence in past elections was a difference maker in countywide contests.

Judge Edith Payne overruled the Democrats this week, finding “no factual or legal support” for their claim that Bergen County Executive candidate Donovan’s name should not appear on the Nov. 2nd ballot in her capacity as county clerk.

Yeah, we’re not saying we like the little brats, we’re just calling them winners for a change. New Jersey will receive $268 million in federal dollars as a consequence of federal lawmakers securing legislation to retain teachers formerly on the chopping block, and the Christie administration applying for those funds. That gives this generation of potential rat race participants a shot in the arm. Given the terrain, they’re going to need it.

Joining Gov. Chris Christie onstage, the assemblyman was the would-be local face of Republican gravitas in Wayne when the governor unveiled his reform agenda on Tuesday. But at least one local activist tried to drag Rumana off his pedestal and kick dirt on his cleats on the auspicious occasion. Detractor Bill Brennan loudly complained again that Rumana breached ethical guidelines when he appeared in front of the state Board of Public Utilities (BPU) to represent the interests of Wayne Energy Corp. – a potential conflict for a sitting legislator.

It’s a storyline that goes from bad to worse. The embattled mayor of Trenton already ate a foreclosure on his Victorian residence. Now it turns out a building owned by Mack’s defunct construction company owes $3,250 in back taxes and fees to the city, according to tax records.

The 9th Congressional District Republican candidate won a hard fought primary against a Tea Party-backed opponent to land his party’s nomination. But when his car jumped a curb, brushed a woman and jammed him up in court, Agosta fell out of favor with the GOP establishment. Embroiled in a life or death countywide struggle against Democrats, party brass now treat Agosta like a pariah, not a good place to be with less than two months to go before the general election.

The feisty 6th Congressional District Republican’s best argument to dump two-decade veteran U.S. Rep. Frank Pallone (D-Pallone) is that the old Green Wave soldier has turned into an out-of-touch fixture of Washington. So what does Little do? She brings in Nevada Tea Party candidate Sharron Angle. The 6th is well over a 2-1 Democratic district. Who’s next for the Little campaign, a tag team triumverate of Phyllis Shafly, Ann Coulter and Sarah Palin?

The Democratic chair of the Assembly Budget Committee tried to drive a stake in the Christie administration with hearings on the Schundler fiasco, only to get buried in a wave of coverage about ethics reform. By the time Christie was done imperiously striding between Wayne and Raritan, Bret Schundler was yesterday’s news and the Democrats looked like pile-on freaks late to a played-out rugby match. 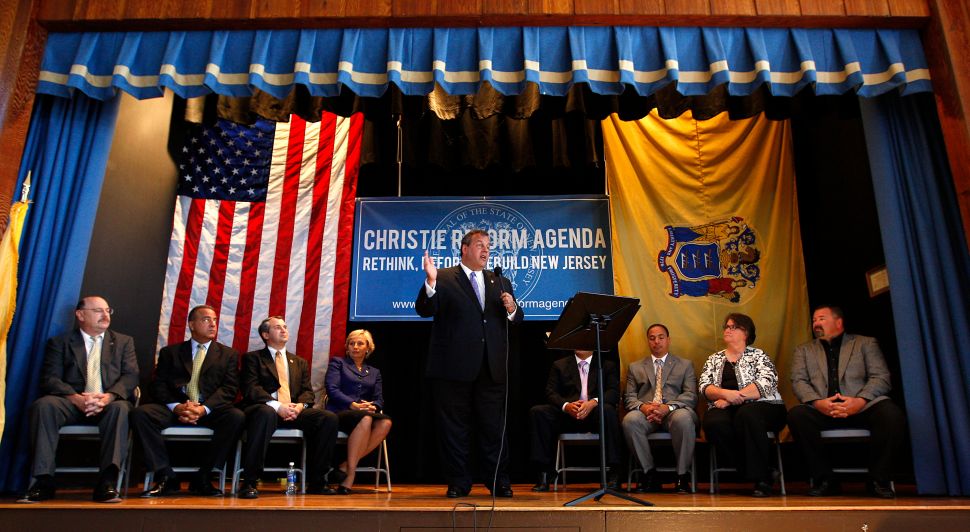