WOODCLIFF LAKE – Democratic challenger Tod Theise left it all on the field on Sunday, one of two debates to be held with U.S. Rep. Scott Garrett (R-Wantage).

Theise is something of a centrist – former Republican running as a Democrat – who made some unbridled charges at the debate at Temple Emanuel of the Pascack Valley.

Garrett kept his cool and spoke more to the perceived missteps of President Barack Obama and Speaker of the House Nancy Pelosi more than anything he had on Theise.

“He’s not running against Nancy Pelosi,” Theise said. “Scott, you (have to) get through me first.”

The 5th Congressional District runs along the top corner of New Jersey including parts of Warren, Sussex, Passaic, and Bergen Counties – “Alpine to Alpha,” as Garrett put it.

He talked about restoring optimism to Washington, as he denounced the Democrats as more obstructionist that the GOP.

The district has been in Republican control since 1933, and Theise came out firing at Garrett, who turned down a more extensive debate schedule.

One of Theise’s favorite facts on the trail is the 61 cents on the dollar that New Jersey gets back from federal taxes, unlike Pennsylvania which gets $1.04 back per dollar.

“Washington thinks we’re rich,” Theise said. “Our cost of living is mush higher than other parts of the country … (This is) the biggest redistribution of wealth since Joe Stalin ran Communist Russia.”

Garret said the federal return on taxes is “one of the most fundamental differences” between the two.

“We will never get the fair share distribution of the dollars,” Garrett said. “You are in far better position than to decide how your dollars are spent (than Washington).”

The government, Garrett said, is generally “so intrusive in the day-to-day” operations of business, but most importantly: “There’s so much uncertainty (for businesses).”

And on leaving the congressional session before renewing the Bush tax cuts, he pegged Pelosi for abandoning business owners. “She’s in charge,” he said. “We left town without making those fundamental decisions.”

As far as the Democrat’s health care bill, Garrett called it an “intrusive … terrible piece of legislation,” worthy only of repeal.

Theise said, “Some of the things are good,” like lifetime caps, accepting preexisting conditions, and extending coverage for young adults.”

“I’m not a big fan of mandates,” Theise said. “I’m an old Libertarian type. I don’t even like wearing my seatbelt in the car. I don’t like the government telling me what to do.”

One of the major benefits of the health care bill, Theise said, was removing anti-trust protection left only for baseball.

“I’m a capitalist; I believe competition is critical … They got rid of that (anti-trust protection),” Theise said. “It overwhelmingly passed in the House.”

But not by Garrett, who Theise tried to put in the pocket of the insurance industry because he received an award for most favorable legislator.

Theise said, “I haven’t taken any PAC money,” unlike the “several hundred thousands of dollars” that Garrett accepted.

Garrett denounced the “politicization of the process” in the health care bill, much like the cap-and-trade bill, overwhelming in its sheer size: 2,400 pages.

If the Dems in the House said they read and understood the bill, Garrett said, “I can assure you they did not.”

Interjecting the federal government, he said, “Actually cost us all in premiums.”

“I have yet to hear one business owner who says my rates have leveled off,” he said.

Obama said he wanted to work with Republicans, Garrett said, but when the congressman handed the president a 24-page report on the topic – as Obama strolled the floor for handshakes after a speech – Garrett never heard back.

“That was over two years ago,” Garrett said.

Theise, who hasn’t positioned himself anywhere near Obama, said, “I feel for you about the Obama thing.”

He said he received a letter from Gov. Chris Christie after he won the Democratic primary that said Christie wanted to work with Theise going forward.

But when he saw Christie, Theise said the governor’s response was: “Get away, I’m supporting Scott Garret. If you win, I’ll talk to you.”

As the debate started, technical difficulties were agitating the crowd as Theise stood up and tried to take control.

After a few moments of confusion, the moderator joked, “Don’t we have a teenager?”

Addressing a somewhat mischaracterized bill that Garrett supported allowing tax breaks for foreign companies with American operations, the sitting congressman said one of the ways to promote the economy is to help the “number of foreign-owned companies who provide jobs” locally.

This prompted an outburst from the crowd – not the only one – but one that had independent candidate Mark Quick, a Warren County Republican, removed from the building. He vociferously objected to Garrett’s backing of foreign companies.

From the back of the room, as he was leaving, Quick shouted, “How about deporting the illegal aliens so people like me can support our families.”

“They’re hiring Americans,” Garrett continued, after a drink of . Whereas, he said, Theise is in favor of disincentives for foreign investment in business and jobs in America.

Theise said it was unfortunate Quick was out of line, but defended his position: “He can’t compete with the companies hiring illegal (workers) in Warren County.”

Garrett said as a fiscal watchdog, his views were called “en vogue” by the Record, while Theise said he was leading the charge for deregulation.

“That’s like saying John Gotti should be running the police department,” Theise said.

On Israeli relations, Theise told the many Jewish constituents in the crowd that he supports a two state solution.

He said on Iran, “There’s no way in hell (Iranian President Mahmoud) Ahmadinejad is getting a nuclear weapon, not while I’m in Congress.”

Theise, a member of the New York Guard, said he’d even go overseas to make sure.

“We should stand behind Israel 100%,” he said, and the country did, according to Garrett, until the Obama administration “turned (things) on their heads.”

He admonished their “Pollyanna-ish” approach “giving the back of our hand to our friends and allies.”

On immigration, Garrett offered a simple response on border patrol. Is the country doing enough?

“No,” he said.”We have not been able to say … who can and cannot come into this country,” owing the confusion to non-consensus by the Democratic majority, led by Pelosi.

“They cannot come to grips on this issue,” Garrett said. “There’s not been any real bills dealing with these issues.”

And for legal immigrants who want to know why illegal aliens may get a free pass to naturalization, he said, “I quite honestly don’t have an answer for them.”

He detailed a grim detail of his family’s struggle to get his Zambian wife a green card.

“What happened there disgusted me,” he said, when his wife was “reduced to tears” after an administrative meeting.

“They called her everything from a prostitute to a whore,” he said. “That happens every day in our immigration office.”

The debate closed with Theise injecting some emotion when he called out Garrett for voting against the 9/11 first responder bill.

“I served as a first responder,” Theise said. “You’re more concerned with closing a tax loophole. Even when I was a Republican, that would have been a deal-breaker in me voting for you.”

But Garrett cut him off at the pass.

“I am actually co-sponsor of that legislation,” he said, but it included a “tax provision that even President Obama objected to.”

The pair will square off again on Wednesday at WRNJ in Warren County. 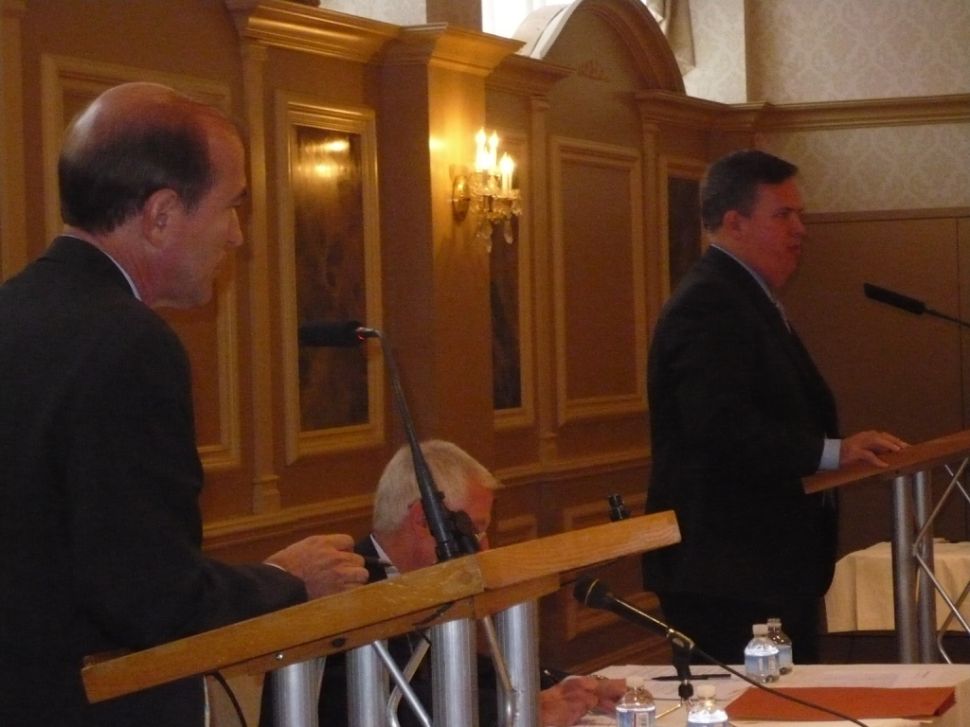