“Those are my priorities,” announces Pascrell, who notes that just yesterday he announced the unveiling of a $475 million training program for people to work in the healthcare field.

Complaining that Washington is increasingly infested with feudal lords and promising if elected to serve no more than three terms, Straten attempts to go hard at Pascrell early.

“Pascrell and Pelosi’s solution is to tax more, spend more and withhold your Social Security,” says Straten, who owns a manufacturing business in Paterson. “Allow the free market to work. Bring jobs back to Paterson. Bring industry back to Paterson. Repeal the healthcare plan so we can buy healthcare.”

“I voted for nine tax cuts for small businesses which your party did not for on one vote,” Pascrell rails. “Where was your party?”

“I have to go back to the biggest increase of taxes we have seen,” Straten says of the stimulus package. “Right now, New Jersey sends a dollar down to Washington and we get 60 cents back. That is not a good deal.”

Pascrell provides a visual now, holding up a letter he says he sent to Republican leadership in the House proposing an extention of his version of the Bush tax cuts.

“They want those making over a million and over a billion to continue to have those tax breaks,” the congressman says. “I say give it those who need it. It is unconscionable to hold up these tax cuts while they decide how far they want to go. If we don’t work together, we don’t work. Period.”

“Let’s move on to a different topic,” Straten says, sparking howls of laughter from the audience.

“The congressman controls both houses of congress,” he says. “If they wanted to do it, they could have done it.”

Jabbed by Pascrell, Straten walks, fuming, away from the podium.

When he composes himself at the mic, the Republican challenger complains that he was pushed at an event by a Pascrell partisan.

“Awww,” a woman jeers from the crowd. “How tall was she?”

Heckled, Straten slams the media for not covering him, and tries to go for the jugular.

“He voted for the war and then voted against the surge,” the challenger says.

“When you try to point your finger at me for not supporting the troops of this country, you ought to be ashamed of yourself,” says an enraged Pascrell. “I voted in favor of 21 pieces of legislation on the war. I always voted to support our troops, I voted 14 years for the defense budget of the United States. I went to Iraq.”

The moderator later attempts to hit Pascrell where it hurts, dredging up a quote from 2009 when the congressman said that compared to the Denver Convention, the GOP’s troops “looked like vanilla.” Now, however, in the county race, the Republicans have two Latinos on the ticket and Pascrell heads a squad of aging white males. 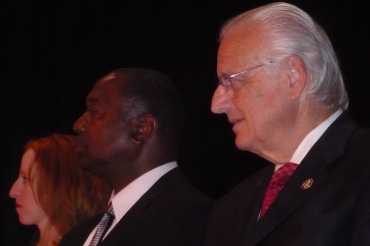