TOMS RIVER –  The UAW auto worker’s son and the dry cleaner’s son mount the stage here at Ocean County College and begin their 3rd Congressional District debate on the subject of the economy.

“It was a way to stop this freefall of the economy,” says Adler. “Are we there yet? No, but we’re on our way. …We actually prevented the realistic possibility of future bailouts. We’ve now essentially outlawed predatory lending. …We’ve also done things for real underwriting for Fannie and Freddie… to prevent the occurrence of this.”

Runyan wants to keep the Bush tax cuts, and he argues that it’s the current Congress preventing that from permanently happening. But Adler continues to very specifically outline his position, by contrast. “There’s a reason why the middle class is falling backwards,” says the congressman. “It’s because we haven’t been growing the economy the right way.”

When Adler asks Runyan which Supreme Court decision of the last ten or fifteen years he disagrees with, Runyan answers, “Dred Scott.”

“People get on the ballot for any reason they want. Third party candidates are insignificant,” says Adler. “You hired people to put TV ads out against my family.”

When each candidate asks the other a question, Adler prods Runyan on which position was the best he took with regard to small business in order to land the formal backing of small businessmen. Runyan admits Adler’s anti-healthcare vote probably earned him the endorsement. But “I question your motive and why you did it, because I believe there was a little poltiical posturing behind it,” Runyan says.

Runyan can’t tell Adler how he would diverge from prospective Republican Speaker of the House John Boehner, explaining that he would vote his conscience.

“The reason why that is a fair question, Jon, is because you’ve tried to lump me in with (House Speaker) Nancy Pelosi,” fires back Adler, who moments later defends spending money on franking as communication outreach. “I returned more money back to the federal treasury than almost anyone else in the New Jersey delegation,” says the congressman, pointing to his office’s diminished salary and travel costs.

In another exchange, Adler verbally slaps moderator Eric Scott, the 101.5 FM newsman – “I’m debating him – not you,” he says, while justifying the stimulus package as a stop-the-bleeding measure.

“This is going to take a while and we must have patience that the private sector can do it when we give them the right tools,” the congressman argues.

Here comes a question from a radio listener. What would each candidate do in Congress?

“I’ll follow Congressman Adler’s predecessor, Jim Saxton, and keep (Fort Dix-McGuire) functional at all times,” says Runyan. “We have to defend this country ffrom all the bad people out there around the world who are out there to hurt us.”

Adler agrees, but goes to a greater degree of complexity in his answer. “We have to make the private sector more connected to the base,” he says – and explains.

Agri-business is getting too much federal money, according to Adler; while Runyan wants to cut non-military discretionary spending.

Adler likes the question. “My mother and I lived on Social Security,” he says, lamenting the Social Security administration’s unwillingness not to provide a cost of living allowance upgrade in tough economic times. He rejects a 401k-style Social Security option as too risky, and then pounds Runyan.

“Groups that are funding Mr. Runyan’s campaign support the privatization of Social Security,” he says.

“You have put out mailers saying I support privatizing Social Security,” objects Runyan, arguing that he doesn’t agree with his financiers on every issue.

Now the challenger rails against Adler’s TV ads calling him out on the Farmland Assessment tax break he received on his Medford mansion where he keeps a donkey.

“It seems Congressman Adler wants to attack me for living the American Dream,” he complains.

“I think if you look at my TV spots, it’s about contrasts,” says Adler. “He doesn’t want to close the loop holes that prevent companies from shipping jobs overseas. My dad was a Pittsburgh Steeler. Just like he (Runyan) was a Philadelphia Eagle, my dad was a Steeler, not on the football field, but in a steel mill. That mill ain’t there anymore.”

Both candidates opposed healthcare reform legislation as it passed in the Congress, and Adler repeatedly uses his “no” vote on the issue as an example of his political centrism.

With two weeks remaining in their contest, Adler has $1.6 million cash on hand, compared to Runyan’s $403,663, according to the Federal Election Commission.

Books? “I’m currently not in the mdidle of a book right now,” answers Runyan. “I’m in the middle of a campaign.”

TV? Jersey Shore for Adler. Jersey Housewives for Runyan.  For fun, the Republican likes his 2008 Ultra classic Screaming Eagle Harley, an answer that triggers a roar of male approval. Adler says he likes watching his kids play soccer, which causes a female swoon in the crowd. 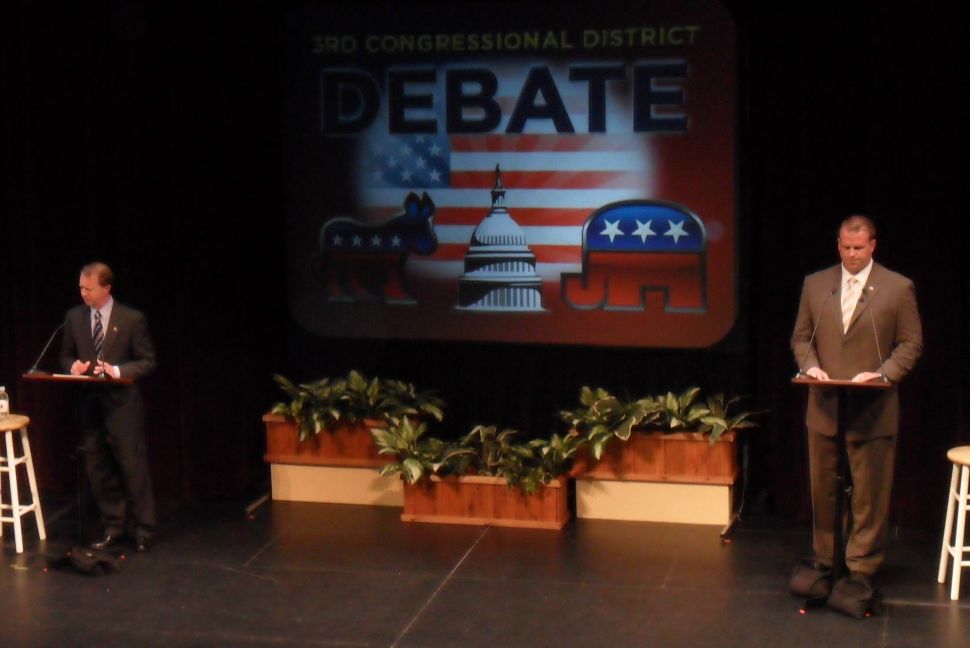