As a state senator and later as a freshman congressman, U.S. Rep. John Adler (D-3rd) earned a reputation as a polished, disciplined campaigner who rarely strays off message.

But this year’s 3rd District race has brought out a new side of the Harvard educated incumbent, one that could turn out to be damaging come November 2.

With the revelation reported Friday by the Courier Post that third party candidate and self-described Tea Partier Peter DeStefano is actually a plant by Adler’s campaign, one that the congressman was aware of, pundits and politicos alike are wondering if his campaign has gone astray.

“This really strikes of desperation,” said Montclair State Political Science professor Brigid Harrison.  “This is sort of par for the course with political machines like you have in South Jersey where you have a win at all costs attitude.”

Harrison said it is likely that Adler is feeling the pressure as a first term Democrat in a district that leans Republican and was represented by GOP favorite Jim Saxton for more than two decades.

Harrison said in its push to wrangle voters, the campaign got sloppy, causing public gaffes and embarrassment for the incumbent.

Friday, the Adler campaign had gone underground.  Calls and emails to campaign spokesman Carol Gaskill were not returned and a call to the campaign headquarters was sent directly to voicemail.  The message was not returned.

This is the second embarrassing maneuver from the campaign, the first coming last month when an Adler staffer was caught taking pictures of Republican opponent Jon Runyan’s palatial home.  Runyan says his 8-year-old daughter was outside while the pictures were being shot and called the move over the line.

Adler’s camp had its own outrage party, claiming that Runyan was using his child to make hay, but the ex-NFL lineman clearly had scored points on the moral front as the Asbury Park Press weighed in with a scathing editorial slamming Adler for the move.

Days after the photo incident, Adler’s camp announced a press conference, where they reportedly planned to unveil a live donkey to highlight a farmland assessment tax break that Runyan has enjoyed on his home for several years.

At the time, a Democratic insider told PolitickerNJ that cooler heads prevailed and the press conference was canceled.  But it caused some to question just how desperate the incumbent was.

“That’s the kind of thing that a desperate challenger twelve points down with a week to go would try,” the Democrat said.

“This whole notion of the plant in politics may not be illegal but it is considered distasteful and even desperate,” Marbach said.  “It almost harkens back to some of the dirty tricks Richard Nixon played in 1972.   It’s not unusual in New Jersey politics but it doesn’t help our reputation either.”

Indeed the story had national legs and was talked about on the Sunday morning political shows.  Speculation on the effect of the incident was rampant among politicos in New Jersey.

But not all have been critical of Adler’s tactics.  Several strategists on both sides of the aisle said the issue was not finding the third party candidate, but getting caught.

“I think it’s smart, tactically,” said one prominent Democratic strategist who is not involved in the 3rd District race. “Both sides create any advantage in order to win. (Adler) is a tremendous candidate, well-disciplined, intelligent, always on message. His strategists are smart people. It’s not like Republicans don’t take every advantage possible, real or created. (Karl) Rove was known for getting issues on the ballot to turn out vote for Republicans on wedge issues, they swift-boated Kerry, hanging chads in Florida.  All I’m saying is both parties do what they can to take advantage of national, state and local environment.”

One Republican politico told PolitickerNJ that he knows of Republican campaigns that have pushed for Green Party candidates on the ballot in an effort to siphon votes from Democrats.

“It’s not new, this was just sloppy,” the politico, who also is not involved in the 3rd District, said.

With three weeks to go until Election Day its unknown if the issue will hurt Adler or not.  The two candidates have been virtually neck and neck in recent polls, with Adler’s lead within the margin of error. As of the last filing in June, Adler had double the cash that Runyan had on hand.

Several prominent House watchers have pushed the race to a “toss-up.”   The pair is scheduled to debate tonight where the incident is sure to get some attention. 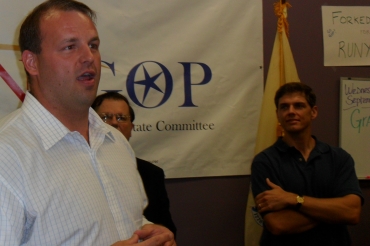