PATERSON – The vaporization this past summer of Jerry Speziale as a sheriff’s candidate set up a showdown between ex-Undersheriff Felix Garcia, the Republican, and Clifton cop Richard Berdnik, the Democrat, which has turned into one of the roughest campaign contests in the state.

Already Bruce Springsteen with a badge, Speziale took his tough guy presence into the movies, pulling desk captain duty in Antoine Fuqua’s “Brooklyn’s Finest” with Richard Gere, even as he pulled his considerable campaign warchest (all $1 million of it) out of the countywide race he abandoned when he went to the Port Authority of New York and New Jersey.

Speziale’s absence energized the Garcia campaign – and simultaneously rattled Democrats, who are desperately trying to activate battle stations against a well-organized Garcia effort. In hurry-up mode, Berdnik this week released his first blitz of mail. Record-oriented. Positive. On Thursday, a twice washed out event is scheduled in which the Paterson City Council – minus Councilmen Julio Tavarez and Rigo Rodriguez – will endorse the Democrat.

Paterson Council President Aslon Goow has sturdily positioned himself as a Berdnik backer. But how enthusiastic others in Paterson intend to be on behalf of a largely unknown blue uniformed entity remains a question mark.

“He doesn’t campaign for himself, how is going to campaign for Richard Berdnik?” one insider said when asked about Mayor Jeff Jones’s eagerness to help elect the Democratic candidate for sheriff.

Meanwhile, Tavarez and Rodriguez and the local Dominican political organization that gave birth to both of them have been working hard for Garcia, rousting what sources say is a staggering number of vote by mail entries for the Latino candidate. One look at Paterson these days is to see the smiling, unfurled image of Garcia, unaccompanied by the initials “GOP” in an overwhelmingly urban, Democratic Party stronghold.

“Felix Garcia doesn’t even identify himself as a Republican on the bulk of his signs and literature,” said Berdnik campaign manager Ryan Yacco. “We have spoken to voters who have had Garcia tell them that he’s the Democratic candidate, or that he’s running on a ticket with Bill Pascrell. His entire campaign is about misleading the public, and he should come clean to the voters on where he stands on the issues.”

There’s a word Democrats – and Berdnik chief among them – utter often this time of year, and particularly under jittery conditions like this.

With Speziale gone, the veteran congressman – and former Paterson mayor – is expected to drive big numbers for Democrats and carry the likes of the Democrats’ little known sheriff’s candidate. But Pascrell’s name will only be on the ballot in 11 of 16 Passaic County towns, and the Republican sheriff’s candidate also has nearly double the cash-on-hand of his late entry Democrat – $80,599 to $45,133.

Since Tavarez and Rodriguez are motivated in Paterson for Garcia, Passaic City becomes an important countervailing player for Democrats, helmed by the campaign presence of Mayor Alex Blanco, the country’s first Dominican American mayor and usually an organizational ally of his fellow Dominican elected officials.

Unlike his Patersonian counterparts, Blanco, as a Democrat – stands with Berdnik.

“We’re backing him 100%,” Blanco said of the Clifton sheriff’s candidate. “We’re backing the Democratic line. This Saturday, we have community events scheduled. We have found that the more people get to know him, the more support he gets. Throughout the week we have a lot of meet and greet events.

“He’s the best qualified guy for the job,” Blanco added when asked how he sells Berdnik over Garcia to Latino voters. “When you put the two resumes together, you look at Berdnick’s police officer training and his years in service – it just gives him an advantage.”

Just in case anyone forgot, this is a contest in which control of the county is at stake. If Democrats lose one of their two freeholder candidates, the fulcrum shifts and the GOP takes over. Republicans tantalized by the prospect of taking down Democrats in neighboring Bergen savor the possibility that they could go 2-0 on the night with victories in Passaic.

After at least two well publicized fits and starts, Garcia and Berdnik finally appear ready to debate each other this Friday afternoon at Passaic County Community College at a forum moderated by the Paterson Pulse newspaper.

Berdnik would argue that he’s been ready now. Twice. But the Garcia campaign – which two times aborted face time with Berdnik – says they’ve had their reasons.

“It’s absolutely always been a concern that the person conducting the debate is aligned with the opposition and has an agenda,” said Garcia campaign manager George Cole. “Felix is not going to go to a debate where the moderator exhibits erratic and unstable behavior.”

The reference is to Hani Awadallah, who got into a tiff with Garcia last Friday at a mosque, two days ahead of a scheduled debate sponsored by the Arab American Civic Association. As reported by the Herald News, Garcia wanted to address the crowd in attendance, Awadallah said – apparently in fairness to an absent Berdnik – not until the debate on Monday. The exchange escalated, and Garcia subsequently pulled the plug on his debate appearance with Berdnik, doubtful at that point of Awadallah’s ability to be objective as moderator. Berdnik allies say Garcia intentionally scuttled relations with Awadallah in order to justify not debating.

“There have been two scheduled debates that Felix Garcia has confirmed and backed out of,” said Yacco. “Felix Garcia has been in this race for a year and a half now. Why are we three weeks out from the election and he has yet to give the voters an opportunity to hear what he has to say? If he had a message or a plan he would have done so by now.”

Cole said Garcia abandoned the first debate – a neighborhood association event in Paterson – due to a scheduling conflict.

In any event, he denies his candidate is scared.

“We are confirmed for a debate on Friday at 2 p.m. moderated by the Paterson Pulse,” said Cole. “We have a second debate planned for Oct. 27th, which is being sponsored by the League of Women Voters. We feel these are two legitimate organizations that will conduct a fair and constructive debate.”

Team Berdnik relishes the chance for a microphone mano-a-mano – in a contest that given the stakes, the cash, the Speziale backstory, unconventional alliances of Garcia and short runway, long runway contrasts between the two candidates – already is one, albeit not always with the microphone.

A press release from Berdnik’s allies just landed and indicates their presumed volatility of the Latino vote.

“We need Freeholders who are going to stand up against discriminatory laws like the one passed in Arizona,” said Haledon Councilman Rey Martinez. “Felix Garcia and (freeholder running mate) Tomas Gomez are misleading Latino voters on their positions – they won’t even admit that they are Republicans on their campaign literature and signs. Latinos in our county need to know if Garcia and Gomez adhere to the often radical agenda of the national Republican Party when it comes to important issues facing our community, like immigration reform.”

Martinez pointed out that the Haledon Borough Council passed a summer resolution denouncing Arizona’s immigration law, passed to “send a strong message to the Latino and immigrant communities in Haledon that these discriminatory policies would not be adopted on the local level.”

“The Republican Party has been openly hostile to Latino issues in New Jersey and the United States – especially on immigration reform,” Martinez said. “In Haledon, I worked to pass a resolution denouncing the Arizona immigration legislation so our Latino community knew we did not support discriminatory policies like this. Felix Garcia and Tomas Gomez need to tell the Latino residents of Passaic County whether or not they support Arizona-style reforms.”

“Felix is a Republican and proud to be a Republican,” said Cole. “He supports equal rights for everyone but also in America we need to abide by the laws of America. He is a Latino and proud to be a Latino. The fact remains we have to protect the rights of American citizens. Felix believes the immigration laws needed to be refined so people come into this process legally. The Arizona reform comes from the people. Felix advocates people migrating to this country through a legal process. The Arizona people are enforcing the laws that were already present. To say Felix is not pro Latino or pro Latino rights is absolutely not true.” 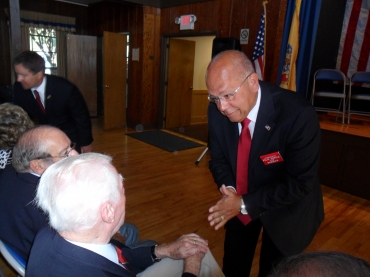