The first battle, Lance said, is the “state of our economy,” recalling the relative failure of Obama’s stimulus plan to combat unemployment.

Stalking federal debt, Lance called it the “fundamental issue of this century.”

He took the opportunity to make one of several references to his New Jersey constitutional amendment allowing voters to decide bonding issues for the state.

“He spent less than a minute, 59 seconds, on the House floor talking about jobs,” Potosnak said. “The only job my opponent cares about is his own.”

Lance sided with Obama on the Iraq and Afghanistan fronts and a few other points, but took no time in denouncing the president’s economic stimulus and health care reform attempts.

On health care, Lance stressed the unacceptable lack of medical malpractice reform in the bill.

Changing the attention from patients to doctors, Lance flirted with missing the voters’ interest, but Potosnak didn’t make him pay: “Is (the bill) perfect? No.”

Propping up his heath care bona fides, Lance mentioned a mammogram bill he backed, but Potosnak pointed out that the bill never passed.

That gave Lance a chance to berate the Democratic majority in Congress, especially Nancy Pelosi, for not working with Republicans.

When asked specifically how they would operate in a bipartisan fashion, Potosnak drifted and called Lance’s work “not leadership, but following.”

With perfect timing, Lance replied, “I guess that was Mr. Potosnak’s attempt at bipartisanship.”

The incumbent was seemingly annoyed at the insinuation that he hadn’t been a cross-aisle legislator.

The Statehouse references were below-the-radar jabs at Potosnak, who has not held any elected office in the state and is nonetheless jumping into a federal race.

But with anti-incumbent sentiment, this may be the year to make such a leap.

Potosnak carried himself with a matter-of-fact style and an almost mischievous satisfaction in burying Lance when he could. But for a governmental greenback, Potosnak was well versed on the issues.

Unfortunately for the challenger, so was Lance. The GOP delegate answered the questions directly and deliberatively, and he kept a gentlemanly air about himself, except when smirking off-camera at Potosnak’s answers.

The League of Women Voters sponsored the debate, aired live with the help of Scotch Plains high-schoolers.

This is one of two debates for the 7th District Congressional seat, even though Potosnak asked for one in each of the four counties in the district.

Potosnak twice dropped backhanded compliments on Lance for “finding time in (his) schedule” to make the debate.

On schools, Lance voiced his backing of charter schools, with no mention of the public-option by Potosnak.

Potosnak, himself a teacher, focused on the Education Jobs Bill, opposed by Lance, which the challenger said would create 4,000 teaching jobs, but was called “negligible” by Lance.

Lance responded with a quote from a Washington Post editorial denouncing the bill as an “election year favor for teachers’ unions.”

“A typical ploy by the Democratic majority,” Lance said.

He also invoked the name of conservative darling and recently resigned Washington D.C. education head Michelle Rhee, with a quizzical rebuttal from Potosnak.

“She’s a chancellor in Washington D.C.,” the Dem hopeful said, noting that the district Lance represents is in New Jersey.

Lance took the high road and commended Potosnak on his service as a teacher: “I would never disparage his public service even though he disparages mine.”

On energy policy, specifically the cap-and-trade proposal in Congress, Potosnak said no way: “Too much of the cost is on the consumers.”

He recommended “making polluters pay instead of rewarding them.”

Lance said he backed the bill, but that was before other nations began changing their minds on energy policy. “That legislation is dead,” he proclaimed.

Potosnak jumped on Lance’s “Washington-speak”: “I was for it before I was against it.”

On the Supreme Court’s recent “Citizens United” decision, which allows for non-disclosure from political donors like corporations and unions, the two candidates differed on party lines.

Lance said the deciding vote on the high court, Justice Anthony Kennedy, “got it right” by arguing that free speech would suffer as a result of more disclosure in political battles.

Potosnak disagreed with the Supreme Court decision, and again called Lance out for taking in financial services campaign money and sitting on the Financial Services Committee of the House.

Potosnak said he called on Lance to return a $5,000 campaign donation from Goldman Sachs, since the company was slapped around by the SEC this year, but Lance retorted in kind.

Obama took over $1 million from the top-dog finance firm, Lance said: “My opponent does not ask him to return the money.”

He said Potosnak is taking money from labor unions, but he’ll make no criticism of those contributions since it is a free speech issue. 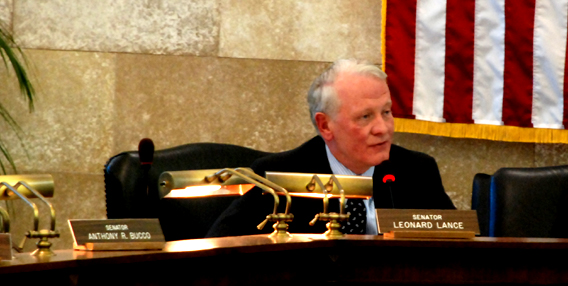