FAIRLESS HILLS – Gov. Chris Christie today campaigned in Pennsylvania for 8th Congressional District candidate Mike Fitzpatrick, who is attempting to regain the seat he lost four years ago at the height of Bush backlash.

Flushed out of office by Bush angst, Fitzpatrick hopes now to ride a backwash of Obama agony.

“As the tide has begun to shift in the opposite direction,” Christie said, “the media is saying the American people are angry. So, according to the media, when you’re enlightened, the people look for Democrats. When they’re angry… they look for Republicans.”

This crowd gathered for this Fitzpatrick fundraiser under a tent on the grounds of a concrete manufacturing plant loved Christie.

“They feel it coming,” Christie declared of Democrats. “The last two years have proven our party is right about the direction of the country.”

“That’s what our party stands for,” said the governor.

Stamped with generic praise – “He will always make you proud;” “I’m confident Mike will stand against out of control spending;” Fitzpatrick stood at attention onstage while Christie mostly talked about himself and his record of success against Democrats in New Jersey. The New Jersey governor’s haybale hopscotch around the country allowed him to test drive the twang in his voice, which he employed here a few times in a wastrel farm country now pocked with rusted manufacturing lots and an industrial park nestled alongside a trailer park.

“The best governor in America,” according to a Fitzpatrick partisan, as Christie basked in the role of Trenton tough guy.

“The pundits said ‘you can’t do that you can’t cut spending and survive politically.’ Well, here I am,” he said, energizing the already enlivened crowd. “The teacher’ss union spent $7 million in attack ads againstt me since last March. They think they’re going to change my mind? There’s no chance.”

When the New Jersey governor reflected that is was nine months ago that he was sworn in as governor, a voice in the crowd cracked, “Yippee.”

“You don’t want to wake up one vote short of firing Nancy Pelosi because you didn’t care enough,” Christie warned the audience.

Also onstage with Fitzpatrick and Christie stood former Pennsyvania Gov. Mark Schweiker, who declared in his build-up to the New Jersey governor, “I want to be able to say that we won, just like Chris Christie did.” 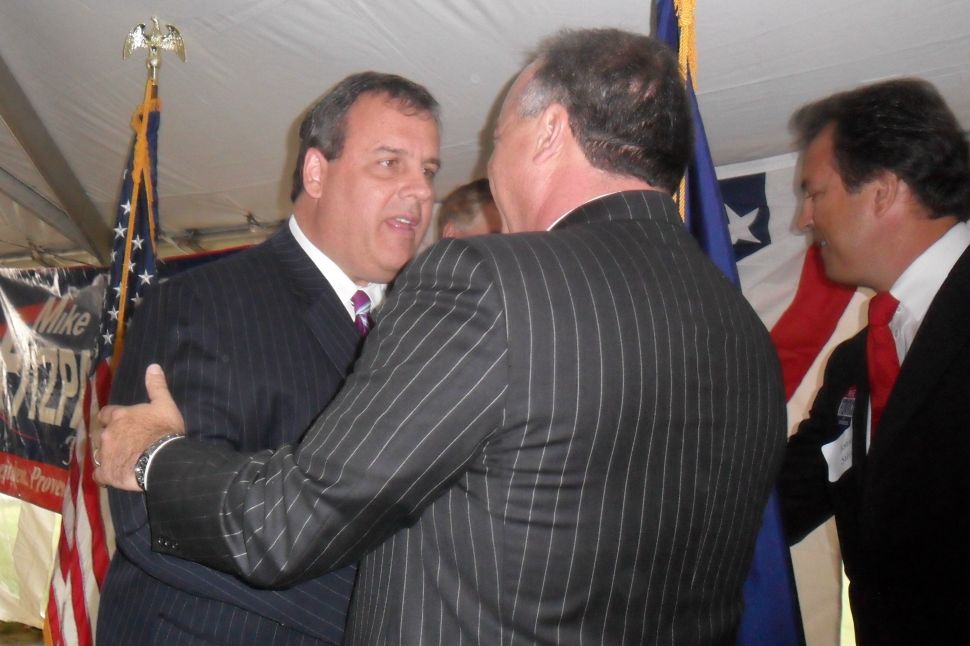