JERSEY CITY – His second in command is challenging his throne, his officers aren’t behind him, and his party disowned him.

Things are not looking good for Hudson County Sheriff Juan Perez, but his response has been nothing but radio silence. Repeated interview requests have been denied by Perez, a pattern he repeated today during a visit to his office by PolitickerNJ.

Stopped outside of the building, Perez again turned down an opportunity to explain himself. “Talk to (campaign spokesman) Bob Knapp,” he said.

In the spring, having lost the backing of the Democratic line – even with Jersey City Mayor Jerremiah Healy going to bat for him to the end – Perez’s last option was to jump across the aisle and run as a Republican.

Now, his opponent is filing a complaint with the Election Law Enforcement Commission alleging that Perez is spending from two separate accounts, Friends of Juan M. Perez and Committee to Elect Juan M. Perez.

Both committees are registered under ELEC, although the Democrats claim only one can be used.

A large billboard in Journal Square was paid for by the “Friends” account, while other political communications were paid for through the “Committee to Elect,” according to Paul Swibinski, a spokesperson for Democratic challenger and Hudson County Undersheriff Frank Schillari.

One ad, paid for by the “Committee to Elect” – listing the wrong treasurer, Swibinski said – appeared in a Spanish newspaper, Cambio, last weekend with a large headline: “Soy Democrata,” translated “I am a Democrat,” next to Perez’s picture.

Reading further, the ad continues, in Spanish, “…and I am voting for Juan Perez,” but contains no other photos depicting any narrator of the quote.

Swibinski said, “This is a pretty blatant attempt to trick people into thinking that Perez is a Democrat, in our opinion.”

Knapp said today that the campaign reports are copasetic. To his knowledge only one is the official committee, the “Friends” account, although that is not clear from the filings on the ELEC website.

Perez’s party transfer was a move of necessity, Knapp indicates. “The Republican Party sought him out,” Knapp said. But when local Democrats, especially Hispanic backers, ask him why he’s in the G.W. Bush party, “He tells them, ‘Look, I’ve been Democrats all my life.’ He’s an ultra-liberal Republican.”

Perez has been no stranger to scandal in recent months and has been for the most part underground since the firing – and later reinstatement – of Schillari one week after Schillari filed to run for sheriff against Perez.

“There were rumors for a couple of months that I might be running,” Schillari told PolitickerNJ today.

But one week after filing petitions to run, Perez sent a letter of termination to Schillari, dropped off out of the blue by Perez’s chief of staff, Robert Lamboy, also Perez’s brother-in-law who was sworn in as undersheriff after Schillari was fired.

“They came in, seized my keys, my car, just fired me right on the spot,” Schillari said today. “They escorted me out of the building and left me in the parking lot in the rain with no car.”

A release from Perez at the time stated: “The position of undersheriff is one of a confidential and sensitive nature and requires the full trust and confidence of the sheriff…It is evident through the actions of Undersheriff Schillari that he is not in compliance with the requirements of the scared trust of the office, and for a period of time has undermined my authority.”

But unless running for Perez’s office can be classified as “undermining authority,” Schillari said nothing to this effect ever happened.

Not so, said Knapp, who couldn’t say much. “It’s still considered a personnel matter.”

“There are charges,” he said. “One of them is the (simple) assault against (Hudson County Sheriff’s Office) Chief (John) Bartucci,” which will go before a judge in Elizabeth in Oct. 19.

In August, Bartucci accused Schillari of shouldering into him in the Hudson County Administration Building, an incident apparently captured by security cameras.

To put the “retaliatory” firing of Schillari in context, Swibinski said Schillari was given a letter of commendation by Perez just a few weeks before the firing.

“I’ve made more arrests in 14 years than Perez has made in his 28 year career,” Schillari said. “I’m a street cop.”

Not long before his firing, Schillari single-handedly arrested a wanted murderer walking down the street outside the courthouse. He just pulled his gun and told the guy to get on the ground, having remembered his face distinctly from photos.

Schillari filed a lawsuit against the sheriff for wrongful termination, but withdrew it in the best interest of the taxpayers – he contends – even though the county’s attorney told Perez the county would not defend the sheriff in the case, according to Schillari.

Even so, under advice of counsel, Perez reinstated Schillari in mid-April.

“He didn’t apologize,” Schillari said. “He had no basis, no grounds. I have an exemplary record.”

Knapp wouldn’t call the re-hire backtracking by Perez or an admission of guilt, but he again points to the ongoing administrative investigations and said, “Everyone has a right to due process.”

Perez has improved departmental technology, anti-terrorism preparedness, and the morale among the officers, according to Knapp, even though he admits the last point isn’t well represented by these examples.

Three sheriff’s office employees also filed a lawsuit in April accusing Perez of punishing them for supporting Schillari by reducing their duties.

Once back on the force, Schillari said, “They immediately took my command away from me. I can’t even tell a sheriff’s officer what to do. I’m in lock-down. I’m second in command by law, but the sheriff has the ultimate say and he stripped me of my duties.”

Put on court oversight, Schillari now answers to Lamboy, although he outranks him.

But even though he can’t give orders to his men, he knows they have his back.

The PBA Local 334, which represents 231 uniformed sheriff’s officers, endorsed Schillari in the spring.

Knapp contends, “There were very few members who attended that meeting.” 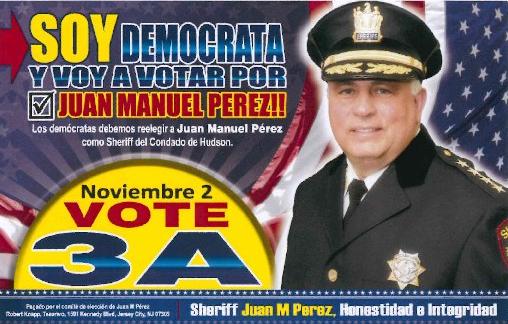