In contrast to Christie’s hard cap on binding arbitration awards so salary increases do not exceed a 2 percent property tax levy, the Democrats’ bill would require an arbitrator to choose a contract award based on final offers from both labor and government, with the 2 percent cap a soft and not hard negotiating back stop.

“The Assembly’s goal in advancing this bill was to at the very least begin an intelligent debate on this key policy issue, and that has clearly happened,” she said.

“The Assembly Democrats had a thorough discussion of this bill today as we continue our efforts to combat property taxes. We have broad support for our legislation, but the bottom line is our hopes to build a consensus have so far been rejected by the governor’s office. …We are postponing our vote on this bill, but we are not going to give up our efforts to find progress on this important issue. We are committed to getting this done for the benefit of New Jersey taxpayers.

“The governor must be open to legislation that does not, as his current plan would do, guarantee annual property tax increases. After all, bispartisanship is much more than a handshake on a stage, and our caucus wants this to be bipartisan.”

Christie Press Secretary Michael Drewniak said in response, “With only 57 days left for the legislature to act, it’s disappointing that another day has gone by without real action on the tool kit, including a hard cap on arbitration awards. A hard cap would bring meaningful collective–bargaining reform and is essential to finally control property taxes for every New Jersey homeowner. Governor Christie urges the legislature to fulfill the commitment it made when it passed the 2 percent property tax cap and enact real arbitration reform and the other necessary tool kit bills without further delay.” 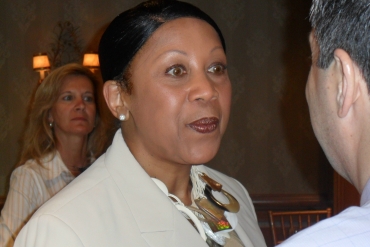