“My question in Plainfield is I’ve got to get them out,” Assemblyman Jerry Green (D-Plainfield) told PolitickerNJ.com. “Just about eveybody’s going to be supporting Frank here. If you ride through Plainfield, you’re going to see one or two Republican signs. We’re hoping to pull the kinds of numbers for Pallone that we did last year for Corzine.

“My literature expressly includes the reminder that the President needs Congressman Pallone in Washington, and we’re running a race here like we’re losing. We’re a little nervous when you see the polls closing and the prospect of the suburban towns not being able to deliver the vote that Frank needs.”

“We all want to work for the same common goal,” added former Freeholder Adrian Mapp. “With the president under attack, it’s important for Frank Pallone to get re-elected.”

The establishment forces of Green are in daily contact with the New Democratic wing of the party headed up by Mapp, combined in their backing of local ward candidates in the more than 11-1 Democratic town, and in support of Linda Carter, a New Democrat and former councilwoman running with the support of the Union County Democratic Organization for a freeholder seat.

Mapp said Democrats want to try to land more than 30% of Plainfield’s 18,134 registered voters on Election Day for the Pallone-Carter-local team.

“They’re all working very hard over there together, and I expect some decent numbers out of Plainfield,” said Union County Democratic Committee Chair Charlotte DeFilippo. “When the president of your country says ‘help,’ and you’re barraged with people who don’t care, I think Frank Pallone wins. People aren’t as ill-informed as the consultants would have them believe. These are hard times but Americans persevere in hard times. I believe the country will be whole again, but the answer is not cruise missiles on the middle class and working families.” 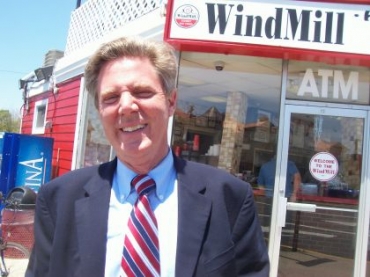