NEWARK – The man who most infuriates some of his fellow Democrats as a Christie clone gone haywire, but whose power projection platform in statewide politics makes him impossible to ignore, Essex County Executive Joe DiVincenzo reaffirmed his belief that the GOP governor is doing a great job and approves of the Republican governor’s grand entrance into the national political spotlight.

“Sweeney and I are still very close,” DiVincenzo told PolitickerNJ.com. “He’s my friend and ally, I have a relationship with him going back to my first election in 2000. I think he’s doing an excellent job as senate president. When you’re that close, you’re going to disagree. Every family has a little spat once in a while.”

After voting yes to advance the subpoena and exasperating DiVincenzo in the process – who prizes his close governmental relations with Christie – Ruiz a week later in committee called the subpoena a loser.

Denying that he and his political mentor Steve Adubato fumed in the shadows of last week’s UMDNJ event, skipped over owing to the Ruiz flap, as others took centerstage with the governor to honor the late Assemblyman Eric Munoz (R-Summit), DiVincenzo explained his take.

“We have serious problems in Essex County,” he said. “We have a high unemployment rate – at 15-17% in Newark. I know Democrats get very upset with me when I praise the governor, but people don’t want to hear about politics. Again, I agree with 95% of what this governor is doing. We’ve got to stop playing politics.

“Everybody has to be responsible for their own vote,” he added, when asked if he believes Sweeney tackled too hard in the caucus to get the 21 votes needed for a subpoena. “People are trying to divide and conquer us, by saying our relationship is in jeopardy. It’s not. My pont is we already know we’re not getting the money ($400 million in federal Race to the Top education dollars, blown owing to a botched application submitted by the Christie administration) back. The governor made a mistake. Let’s move on. The subpoena shouldn’t have happened. She (Ruiz) was going to vote no, she voted yes under a lot of pressure, and she corrected her position the following week. Let’s move on.”

DiVincenzo dismissed the suggestion that Republicans wired into the Christe inner sanctum are putting up a soft touch in Glenn out of affection for the county exec.

“Absolutely not,” DiVincenzo said. “My record speaks for itself. They know – if you’re the Republican Party – you’re not going to be able to raise money to go against me or get traction. I won my last race, 77 to 23%.”

The county executive gave off retirement vibes over the course of the past year, telling Michael Aron of NJN at one point that this next one would be his last term, but today DiVincenzo said he intends to run again – for a fourth term. The remark follows Newark Mayor Cory Booker’s gallows comment that he would rather face human turture than have to seek a third term as mayor, which unleashed intrigue-from-hell backlash and intensified political jockeying on the city council.

Predictably, given their closeness, if Christie runs for re-election in 2013, DiVincenzo won’t challenge him, and not because he believes he would turn into the second coming of Peter Shapiro, the Essex County executive eviscerated by Tom Kean in 1985.

“Absolutely not,” the county executive said of a run for gov against Christie. “Chris and I are very good friends. As a Democrat, I support him in how he’s moving us forward. Republicans are unhapppy with me and Democrats are bashing me, but Chris has been supportive of the work I am doing.”

Certainly the senate majority leader embodies the flipside of DiVincenzo, who notes just two times he can think of when Christie made the wrong call: allowing the millionaire’s tax to sunset and failing to reup state Supreme Court Justice John Wallace. And not surpisingly, as she stakes out positions contrary to a governor who cut schools funding, family planning funding, and remains all times in warpaint when it comes to public sector unions, Buono looks like a burgeoning Democratic candidate for governor.

He also said the political peanut gallery can stop murmuring about the Essex County Democratic Committee dumping Ruiz next year.

“Of course I endorse her re-election,” DiVincenzo said. “Why wouldn’t I endorse her? She’s going to make that decision, that’s up to her. Right now, she tells me she wants to run. I’m going to say again, there should never have been a vote to subpoena Schundler. Why are we playing politics? People don’t care about politics, they only care about who’s bringing the goodies into the county.”

Consideration of Christie at present inevitably includes consideration of his place as presidential material flavor of the month on the national GOP stage. A Tea Party straw poll over the weekend put the tough guy New Jersey governor in first place for 2012, over former Alaska Gov. Sarah Palin.

“I think it’s great that he’s going around,” DiVincenzo said of Christie. “Everybody sees what he’s doing here, why wouldn’t that make him number one on the speaking engagement tour?”

Does he see President Barack Obama as flummoxed by his office, by contrast?

“Obama is in the same situation every president faces in a midterm election,” he said. “You’ve got the economy, and I think Democrats and Republicans are both hurting him. Everytime he tries to do something, Republicans try to obstruct. That’s what we can’t have here in New Jersey. Obstructionism. What the Republicans are doing to Obama is all political.

“And I don’t want that here,” DiVincenzo added. 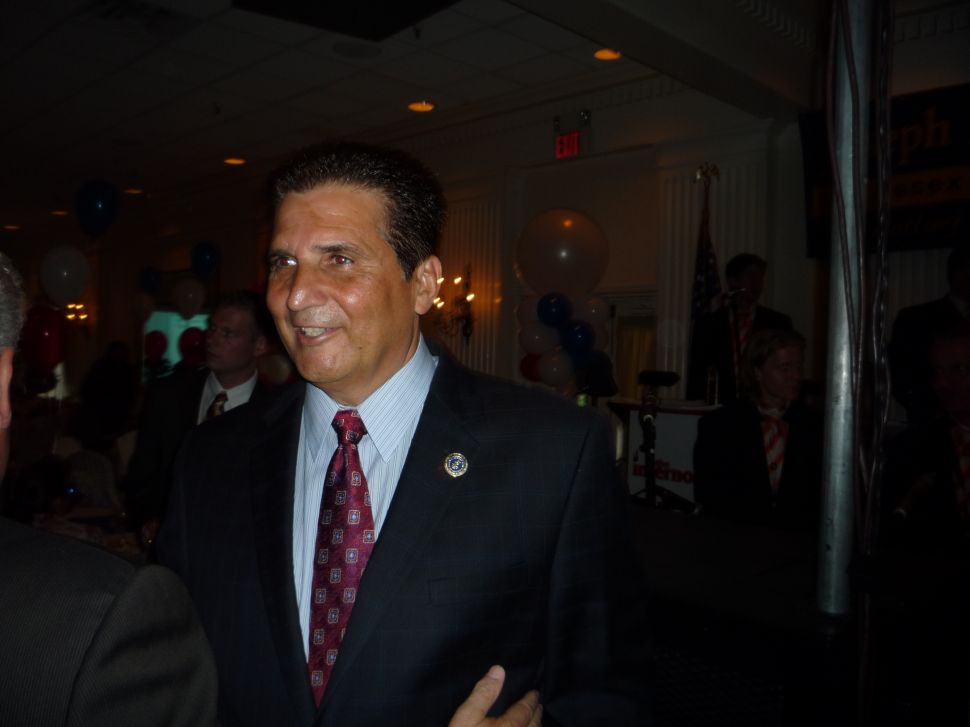