Zimmer’s candidate, Michael Lenz, who she appointed to fill her vacated council seat last year, is facing off against the up-comer Tim Occhipinti, who is getting support from the other half of the city that is hell bent on wresting control away from Zimmer.

Last night, both candidates aired out their platforms and dropped names to oohs and ahhs at the Jubilee Center.

Lenz is resting on his experience, and the notion that a good portion of the city likes what Zimmer is doing. She ran a campaign against developer-funded candidates and touted her grassroots volunteerism and small-donation funding scheme.

Lenz is trying to do the same, but his cache isn’t what Zimmer’s is.

Occhipinti, an up and comer who’s making friends with the born-and-raised crowd, has surrounded himself with the supporters of political ghost Peter Cammarano, who fit the same bill as the 4th Ward contender.

But Occhipinti was ahead of that attack, laying out from his opening remarks that he is his own man.

Both agreed that a campaign promise made last year by Zimmer – a 25% tax decrease – was “too aggressive,” as Occhipinti put it.

He recited a quote from his opponent, Lenz, from a few months ago: “I am not elected to cut taxes.”

Then he took a swing, “My opposition doesn’t cut taxes, he cuts deals to get himself on the payroll.”

Lenz has been dogged by accusations of getting patronage positions at the city and county, where he currently works.

Occhipinti accused Lenz of taking health benefits from the city as a councilman, valued at $23,000 annually, in order to collect a stipend from his county job for foregoing benefits. The young professional also said he would not collect benefits if elected.

Lenz said, “I’m taking them and I think I earned them.”

“I am a numbers guy this is what I do,” Lenz said, first a CPA, then a municipal CFO, now a facilities manager.

Occhipinti, floundering in minor ways under the bright lights in his first real election, countered strongly: “Time and time again on county issues we hear silence from you.”

But Lenz stood his ground – “He just hasn’t been listening” – as a man willing to challenge, or even bite if necessary, the hand that feeds him. “I’ll say it again, the county takes too much money from the city of Hoboken.”

A New Jersey Transit development plan for high-rise towers in south Hoboken was rebuffed last year, only to recently resurface with a smaller scale approach.

Occhipinti opposes the new plan because of re-routing of buses from Hoboken Terminal and the height of buildings, roughly 17 stories.

Repeating his theme that Occhipinti is a machine cog, Lenz tried to score points on the lesser-known Cryan, but the political neophyte is about as close in stature to his droll and dauntless cousin as songwriter Dave Loggins is to famed warbler Kenny Loggins.

“I am deeply honored and privileged to have Jamie Cryan as my campaign manager,” Occhipinti said. “The innuendo that Mr. Lenz is alluding to is ludicrous.”

“I never paid for a vote in my life and I never will,” Lenz said.

Occhipinti went for the jugular in attacking Lenz’s treatment of the mile-square townships voters.

“You alienated so many people in this town,” Occhcipinti said. “They are proud to jump on board.”

Occhipinti also took aim with a reference to 2001 when “street money” appeared on Lenz’s council race ELEC report, to no argument from Lenz.

Then Occhipinti dropped a name of his own: the recently convicted Perth Amboy Mayor Joe Vas.

“Joe Vas, just convicted for crime, you did street campaigning for him in Hoboken,” the new guy threw out there, following blog reports last week.

But Lenz was not thrown off by the attack, countering as always with Cammarano.

“I supported Joe Vas,” Lenz said, “and he fooled me. You supported Peter Cammarano and he fooled you. But I didn’t get Joe Vas’ guy running his street campaign to run my campaign (…) Pots and kettles.”

Lenz showed deftness with the issues, control over his emotions, and a steady hand at the mike, but Occhipinti – short on specifics – hit him when it counted.

Angel Alicea, the city public safety director, who had the “F.B.I. in his kitchen on the same day Cammarano was arrested,” Occhipinti said, is also campaigning for Lenz, hinting a whiff of hypocrisy.

For those behind Zimmer and the innovation-seeking administration, “That all stops,” Lenz said, if he is not elected.

“You’re running to be the mayor’s fifth vote. I am running for the 4th Ward,” Occhipinti said. 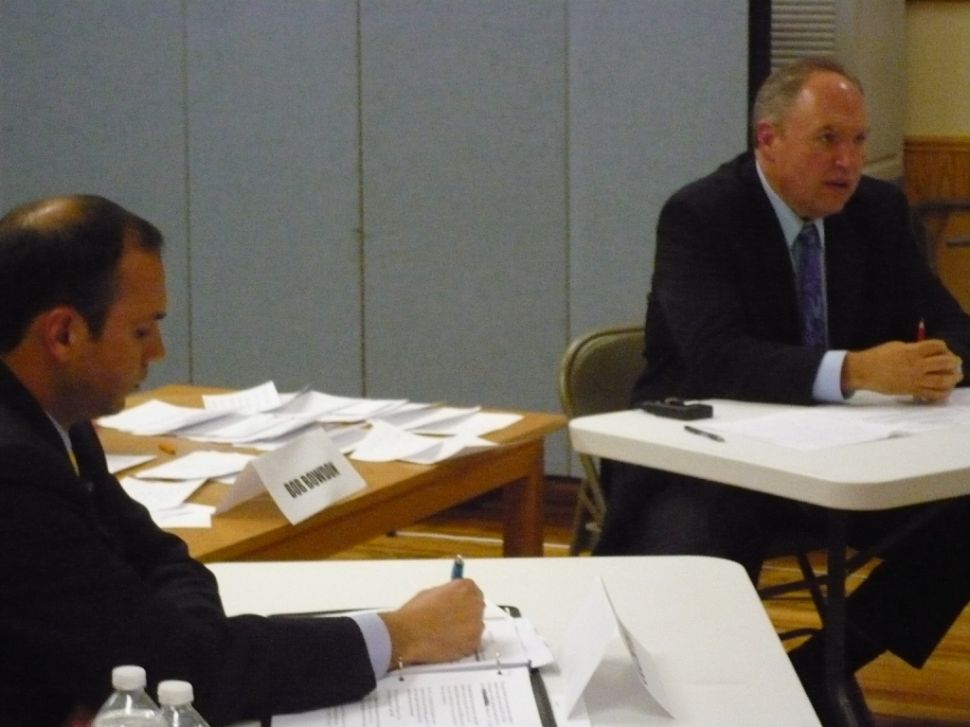