Councilman Steven Fulop has had aspirations to be mayor for years.

In a severely crowded field, Fulop took a pass on the mayoral election in 2009, sensing what political might he had been storing up would be lost to the likes of Mayor Jerremiah Healy and former Assemblymen L. Harvey Smith and Lou Manzo.

Two of those frontrunners were arrested in the corruption sting last year, and the third candidate, Healy, lost several top-level cronies in the same bust.

Having seen the landscape change, Fulop wants to have his affairs in order heading into 2013.

Yesterday, he announced to supporters that he’s opening up an exploratory committee for a mayoral campaign.

“We are exploring a run for mayor in the next election and to put our best foot forward, we want to assemble a team of city council candidates who will put you first,” his redesigned website, StevenFulop.com, reads. “There is no question it’s an uphill battle to run for mayor against the Jersey City political machine. They have the advantage of using their payroll for workers and patronage jobs and they possess a fundraising infrastructure that is unrivaled in the state. Yet I’ve learned from my previous campaigns that these machine loyalists are vastly outnumbered by people who are tired of the Jersey City status quo.”

The press called it his campaign kickoff – even though it was softer than that – but, if anything, Fulop kicked off last year with a zealous fund raising crusade and an active mind toward befriending some of the establishment throughout Hudson County.

“He thinks he’s the mayor since 2009,” said Council President Peter Brennan, an ally of Healy and County Executive Tom DeGise. “Do your job as a councilman first.”

Getting support downtown at Wall Street West has been easy for Fulop, but the city has 168 districts and more nationalities than a Mediterranean cruise ship. All those other districts and constituencies need attention and coordination, and before the election is nigh.

Fulop’s downtown base is also somewhat transient, so the same supporters who are behind him now, may be living on the Upper East Side in three years.

“He’s announcing his candidacy every six months,” said former Mayor Gerry McCann. “I think it was a stupid move. Now anything you do becomes suspect.”

Not even that, McCann said, but for every ‘no’ vote that Fulop lodges against the administration-backed council majority, people are going to want to hear a mayor-like alternative.

Just a byproduct of organizing what will most likely be New Jersey’s biggest city after the 2010 Census, supporters said.

“Steve Fulop’s had a target on his back for five years,” said Tommy Bertolli, Fulop’s political tactician.

One critic said Fulop is starting his fundraising early, not just because his base is limited and because the establishment has a head start, but to circumvent a Pay-to-Play ordinance that he himself penned.

The city ordinance restricts vendors, professionals, and others from receiving city contracts if they made contributions to a candidate for office within a year of the election. So starting early may exempt those contributions from counting in regard to local Pay-to-Play regs.

The names in the mix for the 2013 election haven’t changed much, other than the likelihood of Healy making a run has increased. If Healy doesn’t run, someone from his circle – maybe Brennan – will.

And if Manzo beats his corruption rap, no one discounts another run for the wily Hudson political veteran. 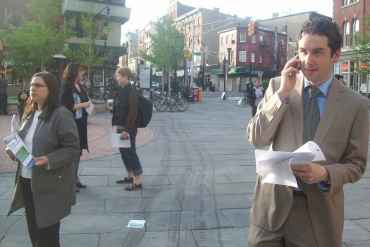