A newcomer to Trenton politics after serving on the Hamilton council, who does not have the deep labor backing that both Greenstein and Smith enjoy in the working class district, Goodwin wants an overwhelming show of force in his hometown, which constitutes nearly 40% of the district, where his name is fastened to Smith’s on intersection signs throughout the Mercer suburb.

“People are profoundly frightened,” said Smith over coffee at the Golden Dawn this morning after working the train platform with Goodwin. “They understand the capacity of the national debt to undermine our economy. We are on the verge of the biggest tax increase in history.”

A determined critic of President Barack Obama’s, Smith wants Democrats at the national level to preserve all of the so-called Bush tax cuts, not just those that safeguard middle income earners.

“The Tax Policy Institute says median income owners would receive a $1,800 tax increase if the Bush tax cuts fade out,” said the congressman, who is running his 17th congressional race this year, this time against token opposition.

“Remember,” he added, “we created 18 million jobs with the Reagan tax cuts.”

On the legislative district level, Goodwin is trying to drive a similar message of tax and spend Democrats spawning a statewide property tax crisis. Asked about President George Bush’s $2 trillion war in Iraq and Republican control of Congress in the central chunk of the Republican’s tenure, Smith said, “History will judge President Bush more fondly,” and will place the economic recession on the shoulders of Fannie Mae and Freddie Mac.

Smith praised U.S. Rep. John Boehner (R-Iowa) and said he would be a good speaker of the house and successor to U.S. Speaker Nancy Pelosi (D-Ca.). The Obama administration, he said, is soft on Red China and AWOL on the human rights catastrophe in the Sudan. But its worst governmental transgression, in his view, is its lack of transparency and lack of willingness to engage Republicans on policy.

Regarding Goodwin’s relative lack of labor support as the senator takes on Greenstein, Smith said, “For my first few races, labor was totally against me. Only later – 1986 – did I get most of them behind me. But remember, the rank and file don’t just do as they’re told.” 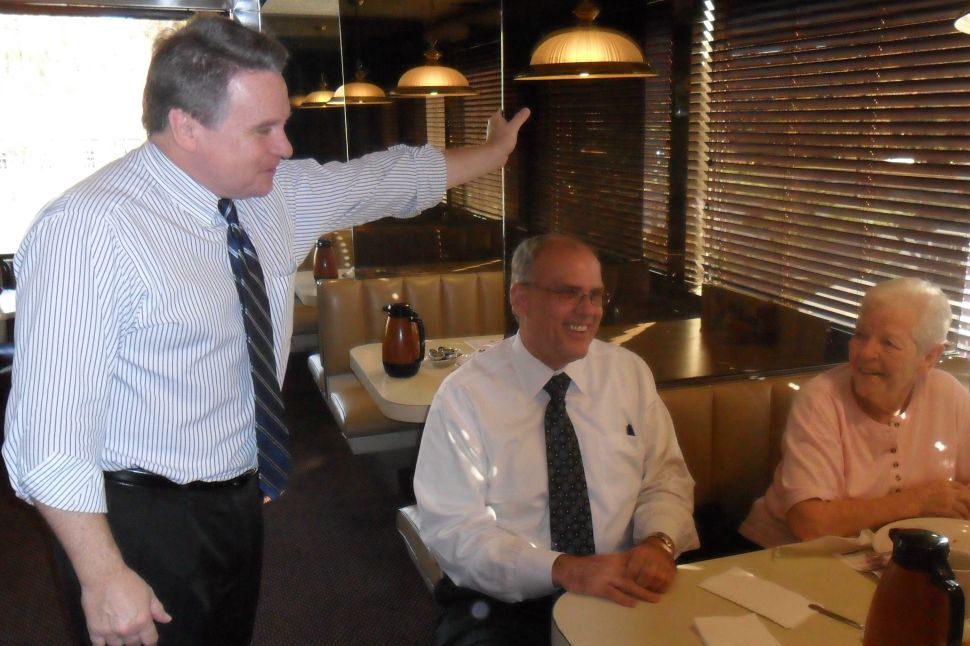