A cycle seldom passes when a competitive race doesn’t grip the 14th Legislative District, and this year proves no exception, as state Sen. Tom Goodwin (R-Hamilton) attempts to fend off Assemblywoman Linda Greenstein (D-Plainsboro) and retain a GOP senate minority of 17 heading into redistricting next year and the prospect of more Republican gains.

A win by Greenstein in this special election would give the Democrats a majority of 24 and lend Senate President Steve Sweeney (D-West Deptford) another option to check Gov. Chris Christie’s reach into the Democratic caucus.

Having landed the seat from the departed Bill Baroni, who now serves as deputy director of the Port Authority of New York and New Jersey, Goodwin presents himself as the eager newcomer supportive of cross-the-board tax cuts and the Christie agenda. Attorney and full-time legislator Greenstein runs as an advocate of collective bargaining with a record of bucking her own party on ethics and pay-to-play reform.

Political insiders initially gave Greenstein a strong edge to win here, based on her past performance, including a 2007 victory over Goodwin and Christie’s battles with public sector workers. But Democrats intent on the win still worry about national trend lines descending into the 14th and entangling Greenstein.

Those trend lines – and Christie’s emergence as a lethal GOP counterforce to longtime Democratic control of Trenton – energize Goodwin and the GOP.

In an environment of anti-incumbency, the former Hamilton councilman happily reports to voters that he hasn’t been in Trenton very long. The Republican knock on Greenstein was that she enabled governors McGreevey and Corzine.

“Just seven months,” Goodwin tells a voter on a door-to-door tour of Greenstein’s neighborhood in Plainsboro. “I’m responsible for everything that happened since March.”

He repeatedly makes that distinction. But even though he has only been there a short time, he’s still the incumbent, and whenever they can, Democrats don’t make him forget.

In her campaign to unseat Goodwin, Greenstein has seized on three main issues, including the millionaire’s tax and family health planning. As a member of Christie’s GOP team in the senate, Goodwin voted against both measures. The senator argues that if Democrats had wanted the millionaire’s tax not to sunset, they would have extended it during the waning days of Jon Corzine’s governership. Greenstein dismisses the argument, noting that Gov.-elect Christie had asked Corzine not to make any moves related to the budget.

“I stand by my ads, which show the insensitivity of what’s going on,” says Greenstein. “Republicans want to protect millionaires while seniors have lost their rebates and homeowners face tax increases. That’s not spreading the sacrifice. And we will have the same deficit next year as we had this year.”

Democrats had initially trusted in Christie being unpopular in the 14th District, home to a large number of public sector workers. But according to both Republican and Democratic sources, the governor polls well here. Many homeowners are tired of high property taxes and crave reform. Still, Greenstein does not think most voters favor giving millionaires a tax break while absorbing the impact of schools cuts and/or local property tax hikes.

As Goodwin campaigns and makes his pitch to a list of undecided Plainsboro voters that Republicans and new blood can reverse course on New Jersey’s fiscal crisis, he encounters two residents wary of the Republican administration.

“His cuts just mean a tax hike locally,” one man wearily tells Goodwin at the door.

“We need the legislature to enact the tool kit now, to empower local government and keep costs ddown,” says the senator.

Another man with two children next to him at the entrance to his home says he was alarmed by the administration’s failure to secure $400 million in federal education funding. At least one other voter complains that a school child’s modern history book only chronicles the presidents up to Bill Clinton.

But Goodwin is not the only one affected by the political turbulence of the governor’s policies, either half or partly finished, whose impact may not now be positive for some residents here.

On the Thursday that Democratic legislators consider and advance arbitration reform to the governor’s hard two percent cap, counsel for the AFL-CIO, the umbrella organization for area unions, says his organization opposes the bill.

“I have a feeling I’m not going to be supportive of the bill,” she says. “I don’t like the approach of legislating salaries and benefits.”

But whatever the final impact of the governor on Goodwin versus Greenstein, Republicans savor Goodwin’s prospects of coattailing popular incumbent U.S. Rep. Chris Smith (R-Hamilton) in the Mercer portion of the district, and being competitive in the Midddlesex section where a Monmouth University poll earlier this month put GOP challenger Scott Sipprelle five points behind incumbent U.S. Rep. Rush Holt (D-Hopewell Twp.).

“Don’t bother wasting your literature, I’m voting straight Republican this year.” Goodwin hears that more than the criticisms of Christie, at least on this evening when he talks to a mix of Republicans, Democrats and independents who don’t often vote.

“The system’s corrupt, there’s no hope,” a man tells the senator.

“Don’t say that – there is hope,” Goodwin says.

“There is none – but I’m voting straight Republican,” the man reports.

Greenstein beat Goodwin three years ago, comfortably districtwide, even as he carried his own town. This year, on lawns throughout the district, including Hamilton, her name stands alone with the candidate’s hope behind it that her longtime supporters remember her, on a terrain ignited by partisan forces and taxpayer woe. 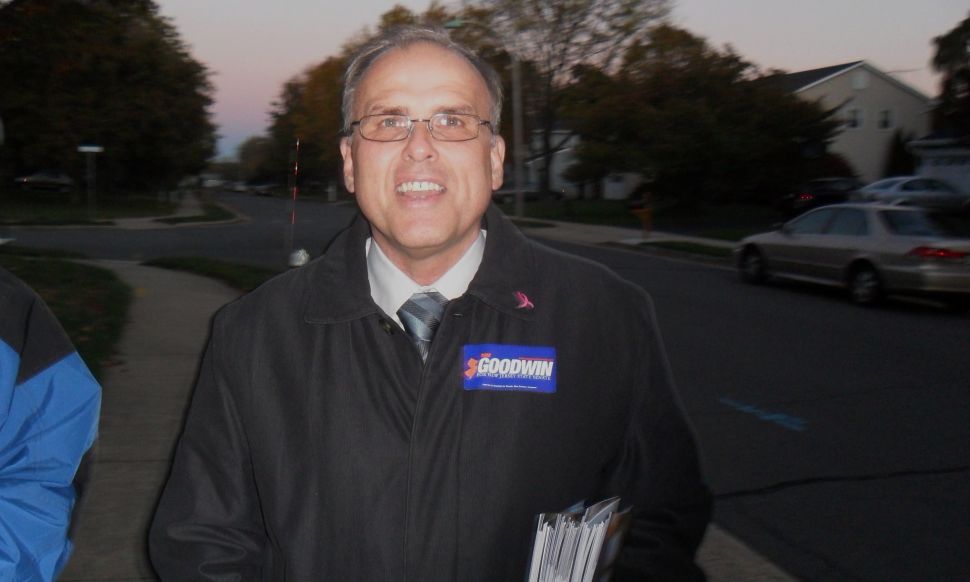