Assemblyman Lou Greenwald (D-Vorhees) had some fun at the expense of witnesses for and against a bill that would limit the number of sample election ballots mailed to each household to one.

Greenwald, apparently angered over a press conference held earlier today by Gov. Chris Christie slapping the assembly for moving slowly on the so –called tool-kit measures –upbraided opponents of the measure,  stressing over and over the “critical legislation” that would save the state $500,000.

Greenwald’s tongue –in-cheek- bashing did not sit well with all of the budget committee members, who had sat in the chamber for more than three hours while Greenwald and Assemblyman Declan O’Scanlon hashed out terms of a bill that would reform the arbitration process for police and fire contracts.

Assemblyman Joe Malone told Greenwald he was being disrespectful to people who had taken time out of their days to come to the chamber and testify.

Greenwald apologized for his interrogation of the witnesses, but again questioned Christie’s attacks on the assembly.

The assembly voted unanimously to move the bill out of committee. 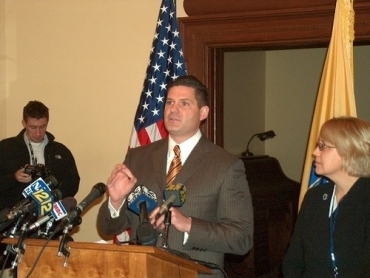