TRENTON – Realistically, Republican challenger Scott Sipprelle was never getting the backing of this liberal watchdog group. So he didn’t even try.

“One more sign of arrogance that exists when someone from a hedge fund is so far removed from Main Street,” according to Citizen Action Executive Director Phyllis Salowe-Kaye. The fact that Sipprelle didn’t respond to the group was the third and least important strike against him, she said.

Strike one was Sipprelle’s denunciation of the health care reform bill passed this year. Strike two was when he voiced his intention to dismantle the new Consumer Finance Protection Bureau.

Sipprelle is battling U.S. Rep. Rush Holt (D) in District 12, and today Holt stood with Salowe-Kaye in the Statehouse to accept their endorsement.

Citizen Action has 60,000 members statewide, and claims to be the largest citizen watchdog coalition in New Jersey. They’ll fund phone banks and mailers on Holt’s behalf, as well as their own GOTV campaign.

The main point of contention for Salowe-Kaye was the Consumer Finance Protection Bureau (CFPA) – which was the peoples’ only reward for bailing out the finance industry.

“We worked over a year to get that passed,” she said, and dismantling it would be a “travesty.”

Citizen Action represents those close to losing their homes, she said, or who have been scammed by credit card companies, or who have been “held hostage at the financial industry,” most likely a shot at Sipprelle, a Princeton venture capitalist who is largely self-funding his campaign.

Holt said he and the group are both concerned with Main Street, not Wall Street.

But his argument rang hollow when he pointed to corporations – the “privileged few” – as those who have no accountability, yet reap the rewards of risk.

“The ordinary families,” he said, “are expected to fend for themselves.”

Holt voted in favor of last year’s federal stimulus package – even Sipprelle is calling it a Wall Street bailout – and yet Holt railed against the no-risk position of bailout businesses.

Even so, Holt said the CFPA is the consumer’s helper.

“You were on your own,” he said, with loans, credit cards, and mortgages before this agency was formed.

Sipprelle – who’s team didn’t immediately respond to a call for comment – told PolitickerNJ last month, “The irony here is that Rush Holt is swimming in a tide of money emanating from Wall Street, including Goldman Sachs and Jon Corzine – the ultimate Wall Street insider.” 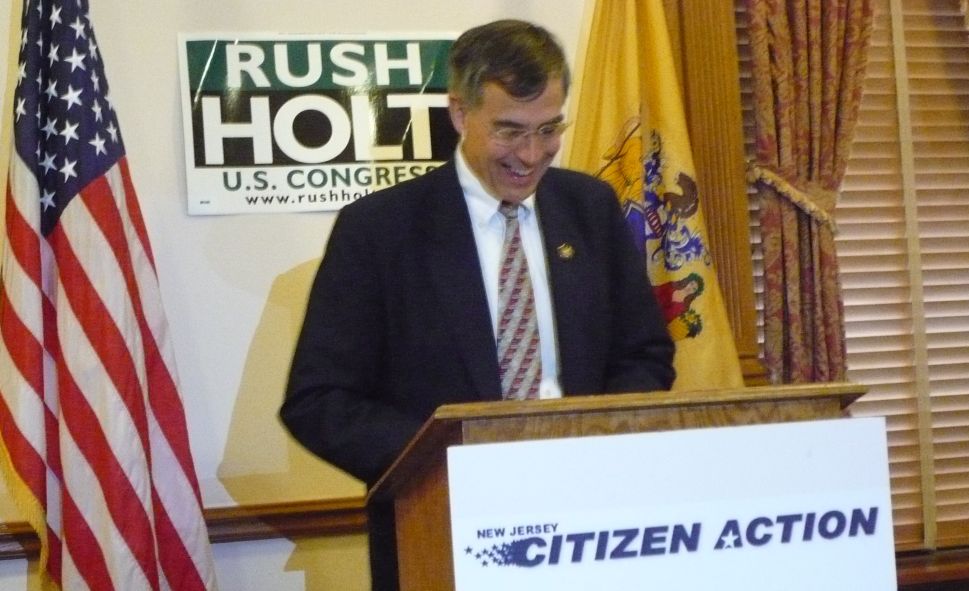