Christie selected Fajardo for his nine-member task force, infuriating Lesniak, whose allies in city government fought a protracted legal battle with Fajardo in addition to every other war waged in recent local political history.

“It’s remarkable that someone found guilty by the courts of using over $88,000 of taxpayer dollars for political ends would be given this kind of authority,” Lesniak told PolitickerNJ.com, referring to a glossy pamphlet prepared by Fajardo and the Board of Education.

“Obviously, it’s the governor’s call, but he ought to take a second look at Fajardo’s actions when he was on the Board of Education,” added the veteran senator. “He lost the case in three venues: the Department of Education, the administrative office of courts and the appelate division: three independent bodies. He illegally spent education dollars. If that’s not a disqualification, I don’t know what it is.”

Fajardo maintains that the Board of Education’s decision to spend $88,000 on the pamphlet was an effort to stop a land deal that would have fleeced taxpayers of $5 million.

“The land is a great location to build a high school and they were suggesting other sites that were not suitable,” Fajardo said. “We put out a booklet, and they took us to court, demanding that we return the $88,000 it cost to produce. We appealed and we lost.

“We stopped a sweetheart deal,”” he added. “The taxpayers were being ripped off. It should have been given to us. They were going to put a supermarket and motor vehicle agency and a lot of people would be making a lot of money.”

Lesniak dug in against the appointment.

“He was found to have illegally used taxpayer dollars for improper purposes,” he said. “I don’t care what his intentions were. He thumbed his nose at the law.

Fajardo and his allies on the School Board last year supported Christie for governor. In a donnybrook election this past June, Lesniak ally Mayor Chris Bollwage defeated all but one of Fajardo’s allies running in muncipal elections.

In his release yesterday, Christie presented Fajardo as a qualified member of his team.

“Teachers are the single most important factor in a student’s success in school,” the governor said in a release. “But today, the current method for evaluating the performance and effectiveness of educators throughout New Jersey is inadequate and unrelated to the most important goal we have as parents, educators and leaders: how well our children are learning.

“Today, I’ve appointed nine New Jerseyans to identify and recommend a system of evaluating New Jersey’s teachers and principals that puts results for our children at the core of these assessments. I look forward to reviewing the final recommendations of this distinguished group and moving forward with needed reforms that ensure every New Jersey child has access to a quality education with effective, accountable teachers at every step along the way,” 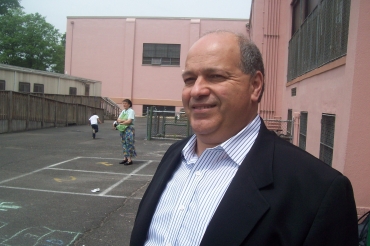