LONG BRANCH – The caravan started this morning from the Cheesequake rest stop on the Parkway, through the autumnal flora of Monmouth County, past the racetrack and into the heart of U.S. Rep. Frank Pallone’s (D-Long Branch) precinct, where police officers neatly plucked Anna Little lawn signs from the median on Ocean Blvd.

Across the side of the red bus, as it pulled up to the Long Branch promenade, read, “Need a job? Fire Pelosi.”

Steele asked the crowd, “Who ya’ gonna fire?”

“I’m in the right place,” the national party leader said.

He looked past large Little signs and over the railing to the beach: “This is the tide that’s rolling in folks.”

The election isn’t being waged on Madison Ave., he said, or from a boardroom, or from Washington D.C.

“The people are the power, not the institutions that are in place,” he said. “That is why Anna Little has to go to Washington … Not to capitulate, not to compromise, but to serve for the people of this district.”

Republicans have an “enormous opportunity” this year, he said, which is owed to the Tea Party contingent of fed-up folks, some of whom stood on the boardwalk. “You helped us restore ourselves,” Steele said.

“The RNC has been very supportive of our efforts in New Jersey,” said Webber, the young GOP paladin, or else, “Chris Christie wouldn’t be governor today.”

Then Webber stood down: “I know who the star of the show is.”

Little, mayor of Highlands and former Monmouth County freeholder, told the crowd, “It’s not about the candidate; it’s about you,” she said. “It’s an honor to be part of your grass roots movement.”

She called out “a certain California girl,” House Speaker Nancy Pelosi, but not by name.

“From one woman to another,” Little said, “how could you do this to my country?”

“This Jersey girl can take a California girl any day of the week,” she said. “Nancy, I’m coming down to Washington D.C. You better look out.”

She talked about love of country, patriotism, sacrifice, and the legacy of the founding fathers, but nowhere in her speech did she mention any policy platform.

A poll released yesterday puts Little only seven points behind Pallone – “very heartening” news in the final week of the race, Little told PolitickerNJ after the rally.

“While our opponent has been attacking us, we picked up two points,” she said.

The crowd of 40 people is only a “small smattering” of her total supporters, she said, who congregate every Tuesday and Saturday and all of whom are “working their towns” right now.

She noticed the police removing lawn signs as she rode in on the bus. “That’s all right, we have 20,000 more,” she said.

Pallone got the endorsement of the Asbury Park Press, which led to some grumblings among the crowd when Steele asked what the headlines will be on Nov. 3.

The Press said: “Faced with the choice between Pallone and Little, voters in the district, which includes all or parts of 28 municipalities in Monmouth County, 10 in Middlesex County and one each in Somerset and Union counties, should opt for the thoughtful, considered positions of Pallone instead of the often strident protestations of Little.”

They also picked apart Little’s 23-percent Fair Tax proposal to replace all federal taxes as a misestimate on her part.

“The Fair Tax also is a misnomer,” according to the Press article. “It would be more fair to wealthier Americans.”

The paper’s endorsement goes on to say, “While she is free with her criticism of the Obama administration, the issues portion of her website is largely devoid of specific, concrete policy proposals.”

Steele told the crowd today that a last push is needed, like “grabbing that crazy uncle who still doesn’t think we can win and getting him to vote.”

“I’m here,” shouted a man in the crowd comically.

Steele, turning serious, pointed to a boy in the crowd and said, “He doesn’t deserve this debt that he didn’t earn.”

The rally ended in ‘Little Army’ fashion with the Pledge of Allegiance led by Little’s husband and the singing of crowd-favorite God Bless America, as the mist settled on the shoulders of the self-proclaimed patriots. 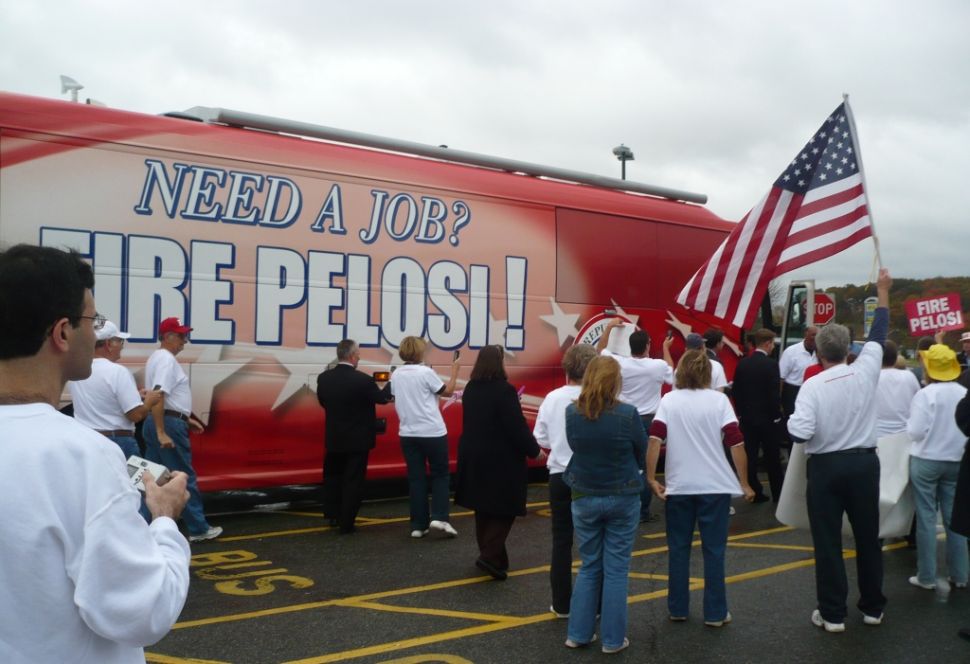