Veteran Democrat Pallone presents himself as a defender of the middle class, which provokes guffaws from the audience of white t-shirted Little partisans, who rumble “Obamacare” slogans everytime Pallone attempts to hit his high notes. Republican fireplug Little packages herself as the middle class champion and fierce Tea Party opponent of government.

“Over time we can get the deficit under control if we reduce spending, and not give huge tax cuts to wealthy people,” says Pallone, who also cites the reduction of defense spending as another option.

“I will reduce the size of the federal government to the scope intended by the Fouding Fathers,” Little argues. “We cannot deficit spend in government. We do not deficit spend at home. We need to have more revenue before we can spend again. …It’s unfair to target the military. Without a military, we have no sovereign nation.”

Seated between a rattled League of Women Voters moderator, the candidates – Pallone in a beleagured, half bemused nasal drone and Little in a loudly projected, robotic monotone – square off starkly on taxes.

“Miss. Little says she wants to eliminate the federal income tax and replace it with a national sales tax, keep in mind New Jersey already has a seven cent sales tax, I think it’s… unfair to the average person. I think that’s groosly unfair to the middle class,” says Pallone.

She wants a fair tax, and zaps Pallone for describing his strategy as “growing the middle class.” Little tells the congressman, “You can’t grow us, we’re already here,” and are entitled to self-rule, sparking a wave of passion from the crowd, later outdone when the challenger subs “Pallonecare” for “Obamacare.”

The boos and catcalls rain when Pallone attempts to answer another question. “She doesn’t care about the middle class,” he tries, and a man screams in a rage, “What’s your solution?” before rattling out a snore when the Democrat tries to reset.

Little says moments later, “Arizona is under invasion by citizens from another nation – and criminals.”

The Republican challenger hits the nutgraph of her campaign when says she believes the health care reform law – proudly advanced by Pallone – is egregious; global warming again divides them.

“She wouldn’t regulate emissions coming from utilities, she would let any business or industry pollute the environment,” says Pallone. “I have been a strong supporter of cap and trade. We have to look to renewables like solar, wind mills…”

The league moderator doubles back on immigration. How would Little solve the immigration problem when she does not believe in big government? Little says the U.S. needs to follow the immigration law as it exists.

“Right now we have two societies, one that is legitimate, and one that is not – it is inappropriate and it needs to be stopped,” Little says.

“The reason Arizona pased this law is because the existing law doesn’t work,” Pallone answers.

“I am opposed to President Obama pushing Isarel with regard to a moratorium on settlements,” he says. “Israel shouldn’t be pushed to accept any pre-conditions. We have to continue to support them militarily.”

Little says, “We have to accept Israel 100 percent.”

She then takes a crack at Pallone for “remaining silent” while Obama, in Little’s view, disses Israel.

Jerusalem as capital of Palestine? As fast as humanly possible in rapid succession, both candidates bark “no” into their microphones.

They quickly part company moments later on the abortion question.

“Life begins at the moment of fertilization,” announces Little. Pallone says, “I am pro choice. I believe it’s the woman’s right whether to decide when to have an abortion.”

The congressman charges Little with wobbling on the abortion question, saying on one occasion that she doesn’t favor government interference and then on another, referring to abortion as murder. On gays in the miliatry, Little says don’t ask don’t tell is fine and Pallone says the law should be repealed.

The latest Federal Election Commisison (FEC) report shows Pallone crushing Little with about $4.2 million cash on hand, compared to roughly $200,000 for Little, but the challenger’s energized supporters are convinced of a coming victory on Nov. 2nd. Assemblyman Sam Thompson (R-Old Bridge), chair of the Republican Party in Middlesex County, glides in and out of ginned up Tea Partiers before the debate and radiates Little confidence.

“Packed,” he says, when asked about the Christie-Little rally, which occured earlier this evening. Jangled by the anti-incumbent environment and a sagging party, Dems nonetheless trust in the natural, Democratic-leaning dimensions of the 6th District. 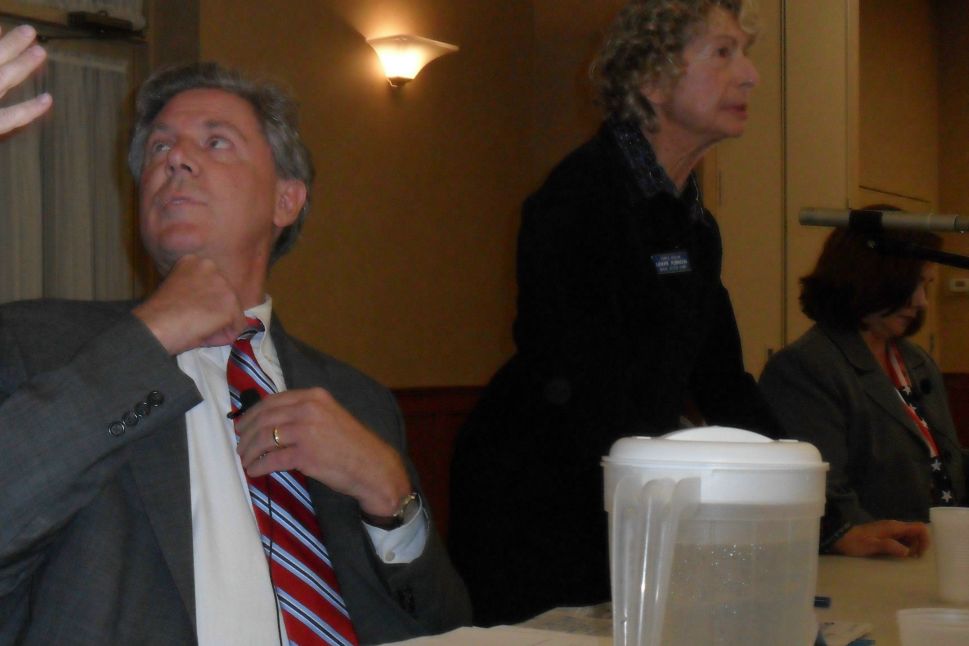