HACKENSACK – Sheriff Leo McGuire, known for his animated speeches, may have gone beyond his ebullient self yesterday speaking to a group of seniors in Ridgefield Park.

“How embarrassing, ladies and gentlemen, for these people in here politicizing your senior center,” Republican Freeholder Rob Hermansen, who also stopped by, said he heard McGuire tell the crowd.

Hermansen said he was also a victim of McGuire’s tongue-lashing.

Donovan said she was there to politic specifically, as it is Political Awareness Month and she took the day off from work to do so.

“We were there talking to the Ridgefield Park seniors,” she said, declining comment on McGuire’s outburst. “We had a wonderful time.”

McGuire said he saw Saudino’s “circus bus” with the Emerson police chief’s face plastered across the length pull up to the center yesterday and was disheartened.

“Imagine my disgust and umbrage when I saw tattooed guys with t-shirts on and political literature everywhere,” McGuire told PolitickerNJ at a fundraiser last night.

“It’s a small room and, quite frankly, I went into protection mode for those seniors,” he said.

He told the crowd, “It’s a shame that you’re going to be exposed to these politics.”

He said he pointed at Donovan, Saudino, and Hermansen individually and told seniors gathered, “I’m disgusted with the politics of this team.”

“But if you want to talk politics,” McGuire said he told the crowd, before explaining that Saudino receives a $190,000 salary for supervising a 17-man department.

McGuire contends, “I didn’t talk politics, I talked the truth. I never said vote for me.”

“If you want to campaign on your record, then do so,” he said. “But don’t hold a captive audience of seniors hostage to your political agenda.”

Saudino’s campaign spokesman, Richard Moriarty, said in an email, “This is Political Awareness Month in the senior centers … This is a chance for the candidates to reach out and let them know who they are and what they represent. That is exactly what Mike Saudino was doing (yesterday). Historically this has been accepted in Bergen County, most if not all candidates do it during this time of the season.”

“That is not the proper arena,” McGuire said. “I was up there for 20 years (as a police officer). These people know me.”

McGuire’s level of intensity didn’t exceed his usual enthusiasm, he said, although his opponents said he was outright yelling.

Saudino’s campaign called it a meltdown and a “disturbing display of desperation.”

Hermansen called McGuire’s outburst a “tirade,” including what Hermansen said was a verbal “attack” directed at him.

As he recalls the remark, McGuire said, “Don’t worry, you’re going to get a chance to take your vote back for Freeholder Hermansen.”

Hermansen said, “I didn’t know until I got to the senior center that I’d be dealing with a child. It was embarrassing for him.”

McGuire said the seniors were “accosted by the politics of this.”

Moriarty said, “It is fitting that during Political Awareness Month these senior citizens got to see who the real Leo McGuire is.” 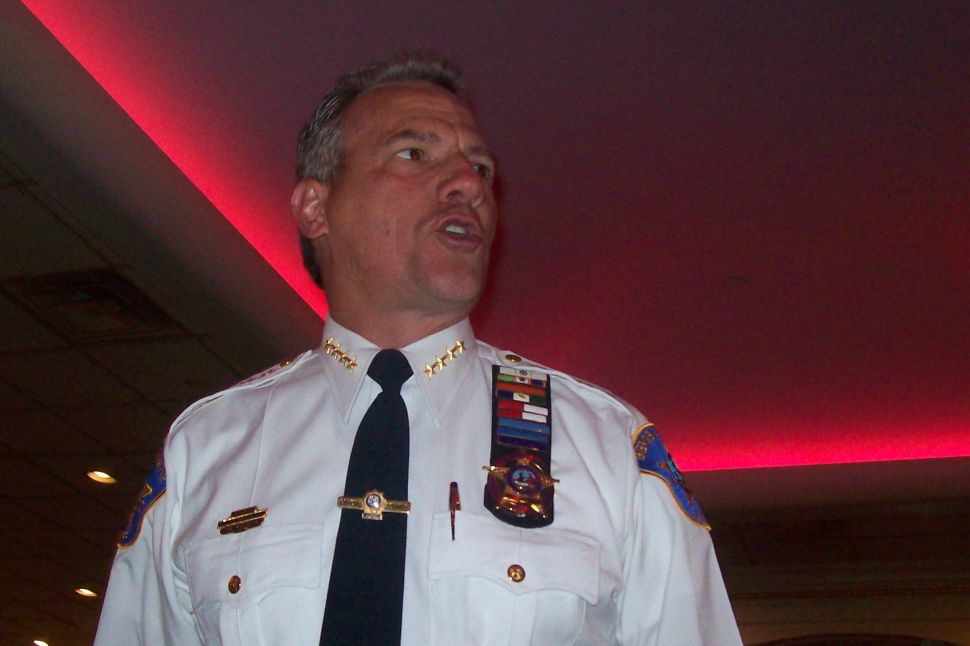