The new poll shows Pallone leading by 7 points, 52% to 45% with a week left until Election Day.

A Monmouth Poll released three weeks ago showed Pallone up by 12 points.

The poll, conducted by automated telephone interviewing with 647 likely voters from October 22 to 25, has a margin of error of 3.9 percent.

“Anna Little’s gains have come from a tremendous grassroots effort in her home region of Monmouth County.  Frank Pallone will need to bet on a strong turnout in more Democratic areas of this district to fend off this challenge,” said Patrick Murray, director of the Monmouth University Polling Institute.

The poll shows the Tea Party-backed Little ahead in Monmouth County 52% to 45%, a stark change from the previous poll, which had Pallone leading in Monmouth 49% to 47%.

But Pallone has maintained the lead he has held in the rest of the district, including Middlesex and Union Counties, where he is up 58% to 37%.  This is similar to his 58% to 33% showing here in the October 6th Monmouth University Poll.

Little has increased her lead among independent voters, pulling in 58% in the recent poll against 51% three weeks ago.  Both candidates pull large majorities of part voters with Little commanding 86% of the Republican vote and Pallone pulling in 88% of Democrats.

According to the poll, early voters make up about 7% of the overall sample.  Those voters are in line with the overall totals with 52% going for Pallone and 45% for Little.

The poll shows Pallone’s job performance rating at 45%, with a 43% disapproval rating, up from 36% disapproval in the previous poll.

Pallone’s personal ratings have fallen slightly to 45% favorable versus 39% unfavorable, compared to 48% to 32% three weeks ago.

Little’s spread is much closer at 38% favorable 31% unfavorable.  Her favorable rating rose slightly from 33% three weeks ago, while her unfavorables have jumped nine points to 31%, up from 22% in the previous poll.

Nearly a third of all respondents had no opinion of the Republican challenger, a high number with just a week left before the votes are cast, but down significantly from the 45% who had no opinion three weeks ago.

In a statement, the Pallone camp said it would not engage in discussions about poll numbers, adding that the election offered a clear choice between what a spokeswoman called Little’s “extremist positions” and Pallone’s fight against special interests.

“There is a clear choice in this election and it is defined by which sides the candidates are on,” said Campaign Manager Liz Duthie. “Anna Little sides with Big Banks, the insurance companies, Big Oil and the wealthy, while Frank Pallone fights against these powerful interests.” 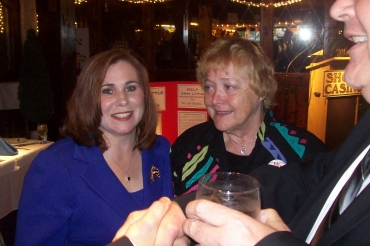