HOBOKEN – Newark Councilman Ronald C. Rice isn’t shying away from Hoboken, even though the last time he got involved in a Mile-Square City election – for soon-to-be arrested Mayor Peter Cammarano last year – the candidate left a trail of slime on his backers.

Lenz is the fifth and deciding vote for Zimmer, who just hosted Newark Mayor Cory Booker two weeks ago at fundraiser.

Rice is Team Booker, so the opposing interests in this out-of-county election are interesting, although Rice wasn’t so close to Booker when the mayor tried to pass his MUA recently.

At the microphone, Rice praised Occhipinti, who he met for the first time tonight, for starting a service-connection group called Hoboken Volunteers.

“This is a young man who deserves to make a difference,” Rice said.

He told the crowd he is a proud member of the Cory Booker team, mentioned Mark Zuckerberg’s educational grant, and talked tough times and tough decisions, like the layoff of 175 police officers in the Brick City.

He finished with a recitation of William Earnest Henley’s poem Invictus, except he snuck Occhipinti into the last verse.

In a new bar beneath a low-rise condo building – in the Zimmer-friendly corner of town – Occhipinti told the crowd: “We’ve got the momentum here. We can’t let up now.”

Speaking with PolitickerNJ afterward, Rice reiterated the promise that may come to haunt him in two years: He said Newark’s almost $40 million structural deficit will be eliminated by 2012. That’s 30 years of overspending that could be wiped clean in less than two years, he said, not exactly what taxpayers are expecting given that the city is selling off millions of dollars in assets in sale-leaseback agreements.

But Rice said the leaseback is the difference between a 16 percent and 42 percent tax increase. It was his idea, yes, but he’s not in love with it. It’s the better of bad options.

No different than other towns, he said, but, “We’re going to bite the bullet now. We’re just a bellwether. We’re not going to just push it.”

Cammarano came to Newark for a fundraiser in 2009, so the last time Rice was in Hoboken was in 2007, when he was the only elected official in the state backing now-President Barack Obama.

Obama hadn’t gone mainstream at the time, so when Rice was hit with press questions he wasn’t yet prepared for, he told Team Obama: “You gotta get me some talking points.”

In an emailed response, Lenz’s campaign manager Sam Briggs said: “We welcome Ron Rice, Jr. back to Hoboken … (T)he last Hoboken candidate he hosted a fundraiser for is sitting in federal prison.”

“Mr. Rice certainly can’t be held accountable for Cammarano’s misdeeds, but he should closely consider the company Peter kept because they are the same folks backing Tim,” Briggs said. “In the end, it is disappointing that a self-proclaimed ‘reformer’ like Ron Rice, Jr. would come into Hoboken to support Tim, because Ron would never select a person with Tim’s inner circle and background in his own city.”

Ramos stepped up his criticism of Zimmer’s administration, for instance on a new flooding pump that he said the mayor is trying to take credit for, a pump that he helped bring in as a councilman years ago.

“Mayor Zimmer was in the audience at that press conference (announcing the pump),” he said. “Michael Lenz doesn’t even know where it is.” 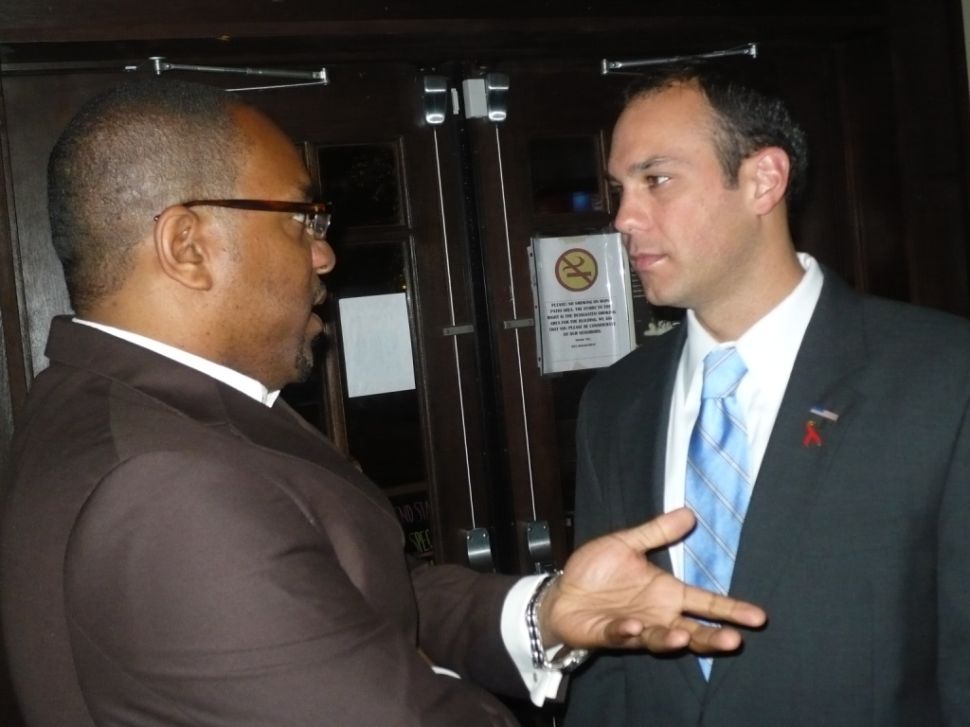