A very brief weekend look at some of the key Nov. 2nd races around the state…

Former Obama State Campaign Director Mark Alexander noted that U.S. Rep. John Adler (D-Cherry Hill) was the first elected official to endorse President Barack Obama in the 2008 election. But he was also the only member of the congressional delegation among Democrats to oppose both versions of the president’s healthcare reform. As Adler tries to defend against former Philadelphia Eagles offensive lineman Jon Runyan, Democrats worry that he has a base problem, but throughout he has argued his independence from lockstep Democratic polices. The raw registration numbers illusorily show Democrats in charge: 122,456 D’s to 107,881 R’s. Endorsements by the PBA and VFW underscore his ability to appeal to groups that often break for the GOP, and his preparedness landed him the bulk of newspaper endorsements, but Adler is on tough terrain in a district with 185,771 undeclareds; a district long held by Republicans before he rode Obama’s change message to victory. Adler also spent a chunk of the campaign in damage control after the Courier-Post fingered third party candidate Peter DeStefano as an Adler campaign plant. Most of the latest polls show a dead heat, but Runyan trending upwards.

The perception is U.S. Rep. Frank Palllone (D-Long Branch) hit the snooze alarm on Highlands Mayor Anna Little, the upstart, Tea Party-backed Republican nominee, once she defeated establishment candidate Diane Gooch in the primary. Now – in a Democratic Party district – Pallone is fighting hard late in the game with TV and radio ads on 101.5 FM depicting Little as an out-of-kilter right-winger. Lacking Pallone’s $4 million warchest, Little ($109,750 cash on hand, as of Oct. 13th) worries Democrats with a vigorous, grassroots effort tapping anti-establishment anger and armed by the fact that Gov. Chris Christie won the district last year over Jon Corzine. Christie has played an increasing role in the Little campaign, in fact, rallying with Little and cutting a straight-into-the-camera ad on her behalf. On Monday night, he is scheduled to appear with Little at Bachstadt’s Tavern, a Bayshore staple. The last Monmouth University poll showed the veteran Palllone up by seven points.

Each has spent over a milion dollars to date trying to weaken the other. GOP challenger Scott Sipprelle ($213,828 cash on hand, according to the Federal Election Commission’s Oct. 13th record) is a venture capitalist with deep pockets who wants to preserve the Bush tax cuts and says he would have opposed the $860 billion federal stimulus package. U.S. Rep. Rush Holt (D-Hopewell Twp., $875,534 in the bank as of Oct. 13th), is a former plasma scientist at Princeton University, does not fit the mold of Pelosi hack, a brand Sipprelle has repeatedly tried to lay on Holt. From the start, a nervously energized incumbent congressman ran like he was in a close contest. “If you look at the district, it’s never been safe,” Holt told PolitickerNJ.com earlier this year. Holt is running constant radio against Sipprelle now highlighting the challenger’s work with offshore businesses during his time on Wall Street and Sipprelle’s beefed up house value and tax drop after a local revaluation. The challenger has put $1 million of his own money into this effort and taken just $9,300 in PAC money, compared to $579,383 for Holt, who, again, continues to question how Sipprelle begot his Wall Street fortune.

Outspending GOP challenger Kathe Donovan by at least 5-2, two-term incumbent Dennis McNerney reported a late cash infusion Friday of $14,220, $8,200 of which came from the freeholder account of state Sen. President Steve Sweeney (D-West Deptford). McNerney’s up on New York television. His freeholder running mates are on radio. The Bergen Record endorsements all went against Democrats, including the sheriff’s endorsement for Mike Saudino over incumbent Democrat Leo McGuire.

If the GOP can win one freeholder seat here they can take control of a county run for a decade by Democrats. Defeated in countywide races last year, Democrats are trying to hold onto power under the top-of-the-ticket leadership of U.S. Rep. Bill Pascrell (D-Paterson), a proven winner. “We need to reach out to the suburbs,” Passaic County Democratic Chairman John Currie told PolitickerNJ.com hours after last year’s loss. Epitomizing that effort this year is Det. Lt. Richard Berdnik, the Democrats’ candidate for sheriff. Passaic County Republican Chairman Scott Rumana, meanwhile, is taking the opposite approach as he guns for votes on terrain typically controlled by the Democrats: Paterson and Passaic City. One half of the Republican countywide ticket is filled by Latinos, specifically Tom Gomez and Felix Garcia (the candidate for sheriff). The Democratic ticket this past week received the backing of the Bergen Record.

Riding Gov. Chris Christie’s 2009 victory here in this once massive Democratic Party stronghold, Republicans under the leadership of Middlesex County Republican Chairman Sam Thompson seek victories in countywide races where the GOP challenges for three freeholder seats, sheriff and clerk. Today, The Home News Tribune endorsed Middlesex County Democratic Freeholders Chris Rafano and Pete Dalina for re-election today over Republican challengers David Rosenthal and Richard Frank; along with Millie Scott for Middlesex County Sheriff over former State Trooper Capt. Keith Hackett. While making the case that Dems should maintain control, the paper did choose one Republican for the third freeholder seat: Jordan Rickards over incumbent Blanquita Valenti. In their endorsement, the editors of the Home News wrote, “If the Democrats can offer a convincing argument that they are, in fact, being responsible spenders, what do the Republicans have left for ammunition? The answer: Not much.” But Democratic operatives off-the-record marvel at Republicans’ grassroots efforts against the better-funded Democrats, and the GOP’s new media tactics to nimbly pinpoint targets the mastodon Middlesex County Dems are slower to engage. 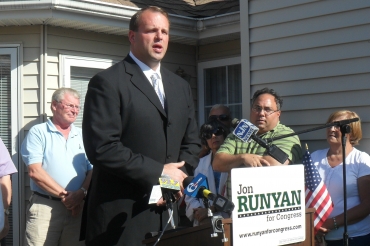