WAYNE – The supporters of 8th Congressional District challenger Roland Straten can’t believe their candidate hasn’t received more press coverage, and drive the argument that in this environment the retired manufacturing company CEO has a real shot against U.S. Rep. Bill Pascrell (D-Paterson) in a district where Democratic numbers overwhelmingly favor the incumbent.

“He received the endorsement of Newt Gingrich,” a Straten backer tells PolitickerNJ.com referring to the GOP candidate. “People want real conservatives in Congress.”

Sitting near the Wayne Municipal Building’s oil portrait of his predecessor, former U.S. Rep. Bob Roe in Roe’s hometown, Pascrell doesn’t appear worried. His chief concern, in fact, according to sources in the room here at the Municipal Building, is not Straten so much as protecting Democratic Party control of the county and advancing the sheriff’s candidacy of Clifton Det. Lt. Richard Berdnik and Freeholders Pat Lepore and Terry Duffy.

Rattled in his last debate with Pascrell in the congressman’s hometown of Paterson, Straten tries to get in a groove here with a suburban crowd in Wayne.

“The man sitting across from me is part of the team that put us in the economic mess we are in,” says Straten. “Pascrell starts Congress in 1997 and then national debt was $5.2 trillion dollars. (House Speaker Nancy) Pelosi takes over, it went up to $8.9, and now it’s up to $13.6 trillion dollars.

It’s meant as a rhetorical question, but the crowd, packed with Pascrell partisans, roars, “Yeah-hhh!” totally engulfing Straten, who tries to shout over the din, his voice cracking with futility.

Then he opens up at close range, voice booming.

Starten’s beef all along has been federal waste and now the congressman again amps the volume.

“You go out and you dig up all the roads in Wayne that have just been paid with $22.9 million,” the congressman tells his Straten. “How dare you say that. You don’t know what you’re talking about.”

Moments later, Straten brandishes the Bergen-Record, which has endorsed Pascrell, and refers to it as a left-wing publication.

Defending the U.S. Supreme Court’s Citizens United decision in the name of free speech, a position opposite the congressman’s, Straten later brands Pascrell as a living receptacle for lawyers, real estate donors and big pharmaceuticals.

“No wonder he loves the healthcare bill: Bayer, biotech industries, Bristol Meyer Squibb, Hoffman Laroche,” the Republican’s voice trails into the wall of the moderator’s voice, who tells him his time is up. 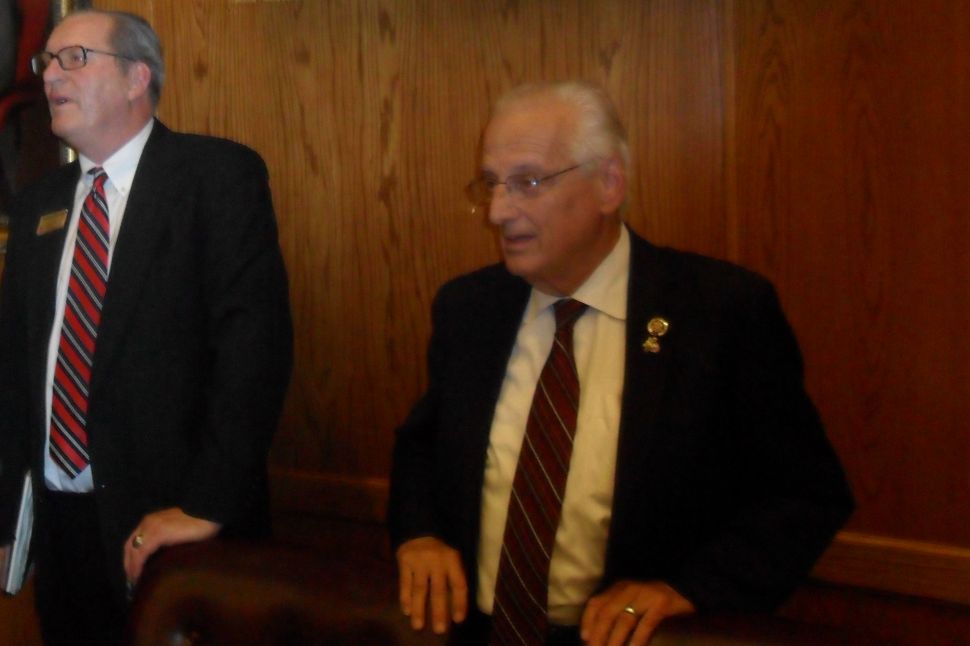