JERSEY CITY – Which candidate evoked the names of Caesar and Alexander the Great as historical bisexuals in response to a Don’t Ask Don’t Tell question?

If nothing else, both major party candidates displayed fine message discipline tonight.

Even though some of the questions changed from their first debate on Monday, none of the answers did; in fact, most of their responses were nearly verbatim.

He said, “I’ve been, arguably, more accessible than anyone who’s even run in his district.”

“I support policies that produce jobs, that make our education system better for our kids, that save, not privatize, Medicaid, Medicare,” he said.

Since the Democratic majority took office, Agosta said, “more than a year before the economic meltdown,” the likes of Nancy Pelosi, Barney Frank, and Chris Dodd have failed.

“I’ve been to 38,000 households in the district,” Agosta boasted, and people want change.

“The good congressman spoke about budgets, balancing budgets. Why are we in such a debt?” Agosta said.

Coming to the forefront for Rothman has been a Record report that the Food and Drug Administration is withdrawing approval of a knee implant that four New Jersey delegates allegedly twisted arms to secure.

The implant company, ReGen Biologics Inc. of Hackensack, was given “fast-track” approval that the FDA said it didn’t deserve.

Prior to the approvals, ReGen gave a total of $28,000 to U.S. Sens. Bob Menendez and Frank Lautenberg and Reps. Frank Pallone and Rothman, according to the newspaper, the four who the FDA fingered pushing for approval.

Rothman said in the Record that the FDA has “mismanaged this issue and this product from the very beginning.”

Asked specifically what infrastructure improvements they would back in Hudson County, Agosta and Alessandrini seemed as if they haven’t paid much attention to the Hudson wing of their district.

Rothman reeled off a couple of projects like the $22 million federally-funded construction of Kearny High School, which he said was the victim of jet fuel residue corrosion due to its proximity to Newark Airport.

How does he prioritize projects? He writes and talk to the local mayors, he said, “and then I bring them the money from Washington.”

Moderators from local newspapers asked if an $800 million light rail extension from Hudson County to Tenafly was a good idea, Rothman said, “We’ve gotten millions of dollars from the federal government for design and engineering work.”

And matching state funds are expected, he said, “If Gov. (Chris) Christie lives up to his word.”

Agosta said the light rail will “help with the commutes,” but, “I would also open infrastructure improvements with private investments.”

Agosta said, “That could actually help speed up programs such as the ARC tunnel.”

“The need for the ARC tunnel is real,” he said. “Republicans and Democrats, unions and private enterprise all have an interest (in finding a solution).”

“I respect the governor’s desire to not break the bank on this,” he said, but noted the closing of ranks to make it happen. “The unions want to kick in,” he said. “Private enterprise wants to kick in.”

The two have been trading barbs on immigration as well.

“If they have not committed a crime,” he said, they should have a shot at naturalization.

Contrasted, he said, to his opponent’s stance: “Let them out in Mexico with a couple bottles of .”

On Israel, Rothman shot back, “They’re like an aircraft carrier of democracy” in the Middle East.

The biggest threat to America, Rothman said, is “our economy,” as in foreign “owners of our debt.” After that, Iran.

“Pakistan is our ally, not our enemy,” Rothman said. 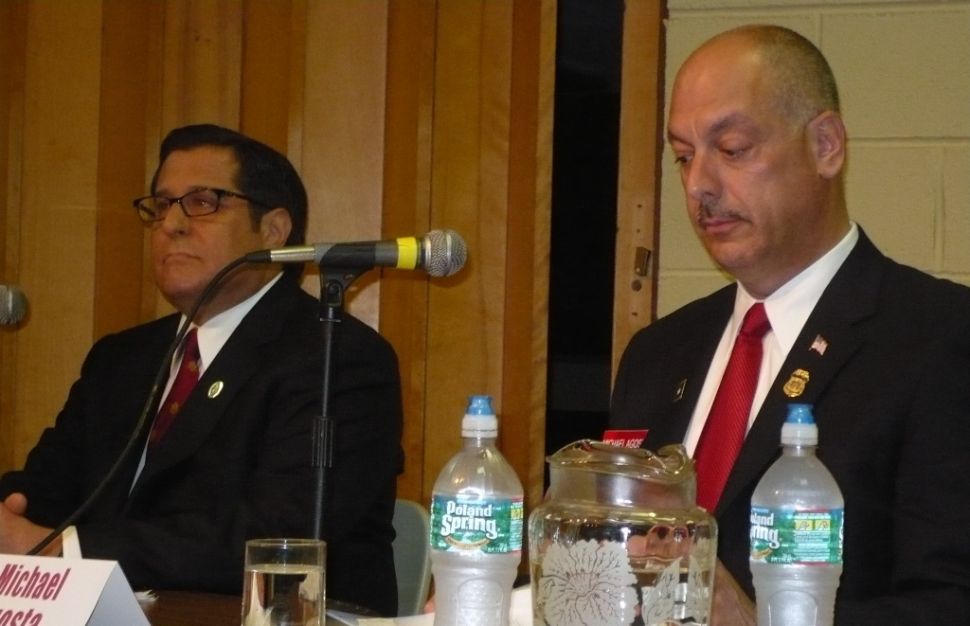