MARLTON – Republican congressional candidate Jon Runyan and Gov. Chris Christie followed a headquarters rally with a round of booth-side handshakes at the Marlton Diner.

“It’s a huge help,” Runyan to PolitickerNJ afterward. “He gets the excitement going.”

Runyan said third party candidate Peter DeStefano may actually draw votes from him, even though it has been widely reported that DeStefano is not an actual Tea Party candidate, but a stalking horse planted by U.S. Representative John Adler’s (D-Cherry Hill) team.

“There’s concern there,” Runyan said about the vote siphoning. Although, he said, “He has no Tea Party support.”

Actual votes aside, Runyan said the situation has become an issue on its own.

“It is about the deception,” he said. “Politics as usual.”

“The biggest thing now is we can actually talk about the issues,” Runyan said.

Not stalking horses, “farmland assessments”/donkeys, or a paparazzi-esque Adler supporter who Runyan said showed up at his house.

“These are desperate attempts to try to distract voters on the issues,” he said.

So what do people want to talk about? Jobs, Runyan said, bar none.

“I don’t think many people are happy with their situation,” he said. “Everybody wants their jobs back.”

“You do get the tax thing,” he said. “We could have the largest tax increase in American history in two months,” referencing the Bush tax cuts up for renewal.

Two Runyan supporters were tired of waiting for Christie to show up – almost an hour late – at headquarters, so they shot over to the diner and had some dinner while the governor came to them.

Alma and Charles Petitto of Mt. Laurel said they were glad to meet him finally.

“He’s a real hustler,” Charles said, in the best sense. “I don’t think we’ve had a governor like this man. He’s cleaning up the deadbeats.”

Ask him a question, Charles said, “He’s going to give you an answer.”

This was their first time meeting Christie, and Alma, a former Board of Education member in Moorestown, said she asked Christie about appointments to the state Supreme Court. The court’s Abbott decision has changed the way school funding works, a major concern of hers.

She said Christie told her that four justices would be replaced by the time he’s done, although the legislature is delaying his first appointment.

“The man takes action,” Alma said. “That’s why I admire him. He’s dynamic, a total professional.”

“I just hope he can bring Jon along,” she said. “I admire Jon for a different reason, because he’s not a politician.”

Adler, she said, did a “fair to poor job” in Congress.

Next up for Runyan is a fish fry at the VFW in Medford tonight and a GOP rally in Toms River on Sunday, where Christie will be dropping in again. 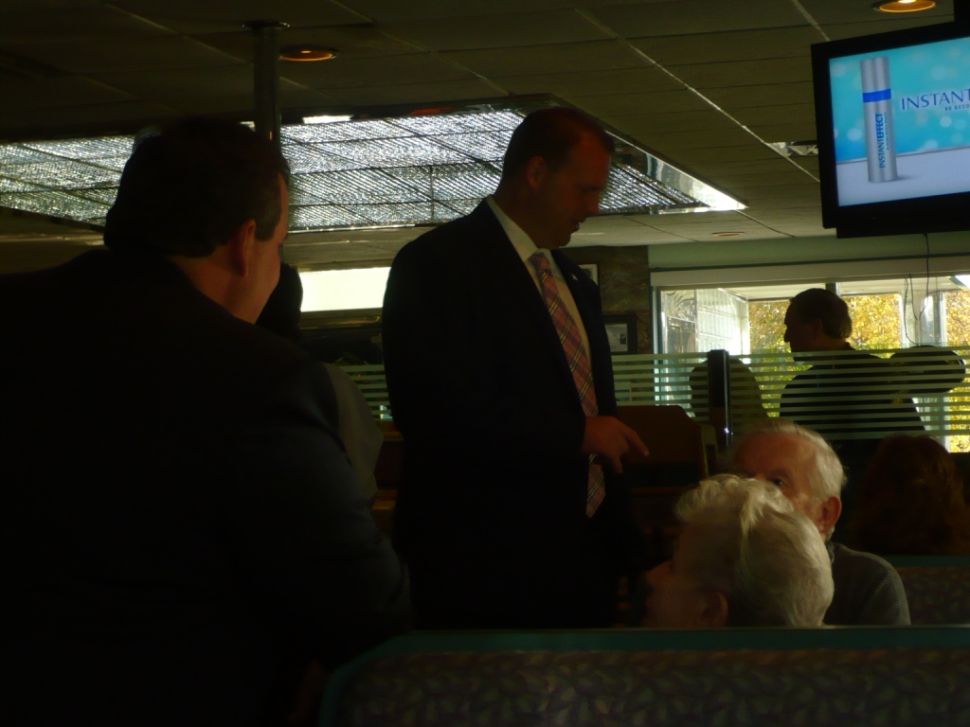