PATERSON – Enraged over not getting a chance to ask questions of the congressional candidates, the crowd stirs angrily while the two men looking to stand in the snakeskin cowboy boots of former Sheriff Jerry Speziale begin their debate here at Passaic County Community College.

Democrat Richard Berdnik, a cop from Clifton, attempts to make former undersheriff Felix Garcia of Wayne, look like a hick in search of a badge, and it’s chest thump city early in an audience eager to see someone else leave the stage in a crate.

“I’m just looking for an answer to the question,” clarifes the National FBI Academy polished Berdnik.

The exchange cuts the crowd. There are jeers and laughs.

A 30-year veteran of the department before he butted heads with Speziale and left carrying $150,000 after winning a wrongful termination lawsuit, Garcia once ran the jail. Berdnik gripes, “We don’t need someone who’s been out of the sheriff’s department for ten years. We need a fresh new face, and that’s what I am.”

The Democrat praises the current cleaniliness of the jail.

“They took a week to clean that jail before you came through,” Garcia deadpans and the crowd loves it.

“And I’ll tell you what,” Berdnik answers, “when I’m elected sheriff, it will remain that clean.”

“The sad part is you’re not going to be the sheriff,” Garcia fires back.

“My house was never raided by the attorney general’s office,” Berdnik cracks.

“Would you like to see this letter where I was cleared by the AG’s office?” asks Garcia, who marches across the stage and presents a sheet of paper to his opponent.

“Where does it say the whole case was terminated?” asks Berdnik, eyeballing the document and seesawing the crowd’s enthusiasm back onto his side.

After another upswell of passion from the audience, a cop boots Councilman Aslon Goow, a fierce Berdnik backer, and then collars a front row Garcia supporter and propels him onto Goow’s heels and out of the theater. The men reappear moments later.

“Everytime I ask a question, Mr. Garcia looks down at a piece of paper for his answer, I find that interesting,” Berdnik says.

But the Republican doesn’t look down for his rejoinders in this tin star version of dozens. Democrats had promised to make Garcia appear to be a foot-in-mouth flunkie, and it didn’t happen.

“You were appointed to your position, I passed the exams,” the Democrat says. 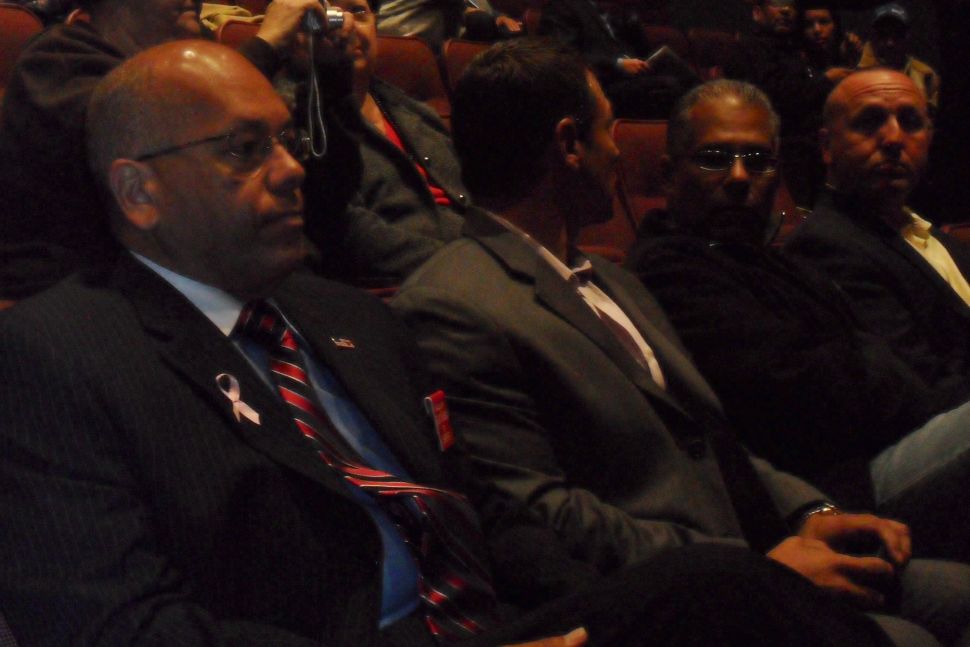