PARAMUS – In a Democratic district that snakes though southern Bergen County and touches Passaic and Hudson, U.S. Rep. Steve Rothman (D-Fair Lawn) has a challenger from inside his home town.

The Record endorsed Rothman – “Incumbent represents district well” – and color copies were handed out by Team Rothman at today’s debate in front of the League of Women Voters at Bergen Community College.

Agosta has knocked on 38,000 doors – some sort of record – and he said he knows what people want. Jobs.

Rothman is all for extending tax cuts for the middle class, but for those earning $1 million per year, not yet. He wants to see the national numbers in December.

“I used to be a judge,” he said. “The evidence hasn’t come in (on whether we can afford those tax cuts).”

Not the stance Republicans took, he said: “While they talk about wanting jobs in America, they voted against that bill.”

“I voted against TARP because I didn’t think it went far enough,” Rothman said.

“Too weak on the banks” and “no strings on the money,” he said.

Rothman called out Wall Street “fat cats” and the Republican Party to reveal the names of donors.

Agosta said, if they’re not public officials, “I do not believe they have to disclose anything.”

Rothman touted his production as a representative. “I brought home more money from Washington than any other congressman ever from this district,” Rothman said.

Agosta said, “Congress has taken this country in the wrong direction … I’m not a professional politician.”

His direction would be to repeal the health care bill, for one.

“It’s not the government’s responsibility to provide health care,” Agosta said. Medicare and Medicaid need to be addressed and tort reform is sorely needed, he said.

Rothman voted against the TARP bill, but he got in line behind the Dems for the healthcare bill.

He checked off some of the pro-ObamaCare initiatives he likes, like extending Medicaid.

He said 33 million more Americans now have health care because of it.

On the other hand, “We’ll make changes.”

On his door-knocking tour, “Not one person talked to me about green projects and alternative fuels,” Agosta said.

“We need new energy policy,” Rothman said to avoid “dictators and thugs” who have the oil.

“The good folks of the district,” Agosta said, “that’s not even on their radar.”

Even though Agosta just left PSE&G for an outside service provider – “That’s all fine and dandy,” he said – the biggest thing in energy is batteries.

“We can harness it, we can’t save it,” Agosta said, allowing Rothman to plug the Recovery Act that funded research for batteries.

Among the region’s infrastructure needs, Rothman said high speed rail investment and the ARC tunnel project are most important.

If the Gov. Chris Christie is willing to work on it, Rothman said, “work out changes in design, changes in scope, changes in the funding.”

Agosta said to open infrastructure needs up to private investors.

As for the ARC tunnel, he said, and of governmentally-contracted projects in general:  “People, it’s a sham, it’s a scam, and it hurts us.”

Cost overruns, he said, wind up being double the original amount.

“Xanadu. Do I have to say any more?” Agosta quipped.

Rothman said he’s for legalizing illegal immigrants after they pay back taxes, a penalty, learn English, and go through the naturalization process.

“My opponent wants to put them on railroad cars,” Rothman said.

Agosta said he was misquoted in reports about railroad cars – nothing approaching an Auschwitz reference, he said – but he does want to put illegal immigrants on Amtrak out of the country.

Secure the borders, he said: “We have drug addicts, we have criminals, we have rapists coming in here.”

Agosta is for term limits – “Ab-so-lute-ly” – while Rothman said, “We actually have them now. They’re called elections,” every two years.

The candidates did not discuss their views on abortions, but Agosta interjected it into a question about foreign aid. He said not for abortions, on which Rothman corrected him.

The Hyde Amendment, he said, was a Republican initiative that banned it.

Agosta said he would be in favor of offshore drilling closer to the coastline for security purposes. Rothman said he would be against it in New Jersey – “unnecessarily dangerous” – and would allow other regions to decide their own fate. 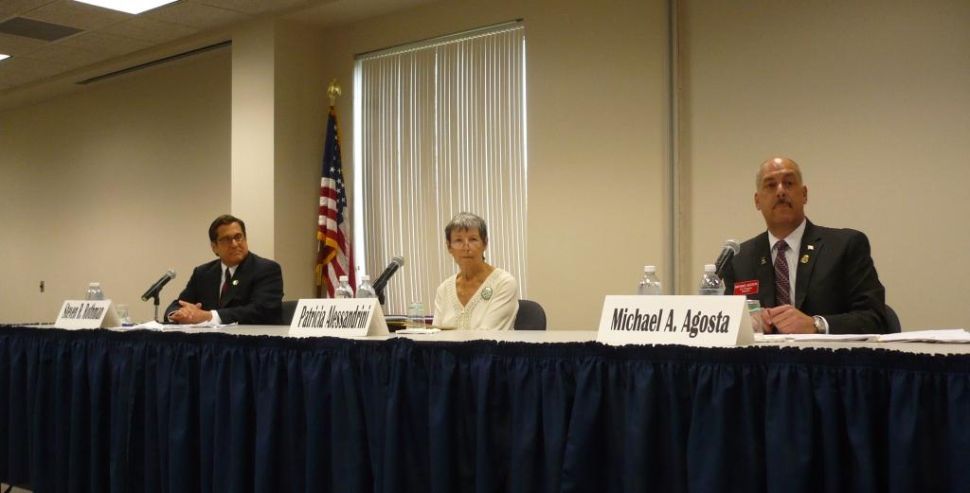