The supporters of U.S. Rep. Frank Pallone (D-Long Branch) insist his schedule is no more accelerated than a usual campaign year, but this time he’s making the rounds of nook and cranny events with that trusty self-promotional instrument always in tow: Twitter; by which Pallone alerts the world to his dutiful presence at a hot dog counter here, a chili fest there.

“Congrats to Sister Garvey on her Diamond Anniversary – 60 years of service to God and the community,” trumpeted the Democrat, careful to get a nod to the Supreme Being in there, not a bad thought, considering he’s running against a conservative band that could always sneak up and grab a bigger than expected sliver of the church-going vote.

Stuck with the prospect of running against the most publicized Tea Party-backed candidate in the state, Team Pallone has been loathe to engage Highlands Mayor Anna C. Little head-on. Republican and Democratic sources alike say Little’s signs alone dominate the Middlesex portions of the 6th District. Their strategy to this point has been to plant Pallone in every corner of the district that could generate base voters and let him operate.

“It’s strange,” said one worried Democratic insider. “They’re just sticking to their rhetoric, which is ‘let’s blame the Republicans.'”

But the veteran congressman’s attendance at a Somerset County Democratic Orgainzation event last week at El Dolce was “always a pleasure,” in the words of Vice Chairman Zenon Christodoulou. “This is a voice of progress for New Jersey, a man with a great sense of what it takes to get New Jersey back on track.”

As of this writing, Pallone – with over $4.1 million cash on hand – has run no radio or TV against the Little camp, unlike, for example, U.S. Rep. Rush Holt (D-Hopewell) in the neighboring 12th District, who called out his opponent at his campaign launch and fired off a salvo of attacks, including a TV ad in which the candidate embraces Main Street as a contrast to challenger Scott Sipprelle’s Wall Street roots.

“I’ll be very surprised if Sipprelle doesn’t win,” said Middlesex GOP Chairman Sam Thompson. “He has money, of course, and he’s making inroads in non-traditional groups, including the Jewish and Indian groups.”

Certainly, the establishment -backed Sipprelle has more money than Little – and more ready access to money as a millionaire; and Pallone’s district still looks like a Democratic Party lock registration-wise, at least party to party: 122,722 D’s to 50,463 R’s.

Whatever the dimensions of Pallone’s progressive message, Little is convinced she holds the reins of a populist wave of anger.

In her maiden congressional quest, the underdog Little posseses a lot of small donors compared to Pallone, whose pie chart favors PAC contributions over indivudals by more than 50%. Pallone’s PAC list includes his usual mix of labor unions, insurance and health providers, dental and doctors’ PACs and a smattering of Native American tribes.

Establishment GOP types worry, though, about Little’s pro-offshore drilling stance (she supports it), and a campaign stretgy that high balls what Little sees as Pallone’s wrong-headedness healthcare reform.

“Remember, Frank Pallone said this is HIS bill. ‘This is not Obama’s bill. This isn’t Nancy Pelosi’s bill. It’s MY bill,’ he famously said,” the challenger noted in a recent press release, referring to healthcare reform. “I wonder what is Frank’s solution? Because my solution is simple – don’t give waivers, just repeal the darn thing. Remember, you cannot change Washington without changing the people we send to Washington.

“Nancy Pelosi and Frank Pallone were wrong to enact legislation mandating a government takeover of our healthcare,” said Little. “The bill they pushed through puts a government bureaucrat between you and your family doctor, reduces patient choice, raises taxes, and cuts Medicare by $500 billion. That’s just wrong.”

“We applaud everytime Anna hits Frank on Healthcare,” said an insider connected to the Pallone campaign, who also believes that vast middle ground of independent voters in the 6th District – 160,334 at last count – won’t want a Tea Party person.

Less enthusiastic in his assessment of Little’s chances compared to Sipprelle’s, Thompson said he believes Little has a shot.

“That’s what they’ve been out there working on, as well as making telephone calls,” said Thompson, when asked about her outreach to independent voters. “Anna has been in Old Bridge, Edison, and South Amboy. I’m not sure what the Tea Party message is, but I know that poople are very much upset right now with Obamacare and unemployment.

“In Anna’s case, it’s a turnout question,” the GOP chairman added. “No question, she’ll be closer to Pallone than anyone. Unhappy people are charged up, and turnout could be the factor that puts her over the top.” 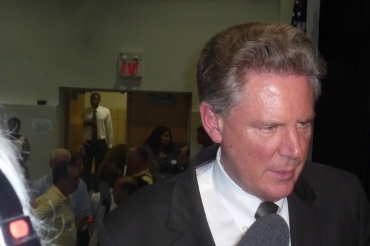