EDISON – Last night, U.S. Rep. Frank Pallone reduced his opponent, Mayor Anna Little of Highlands, to an extremist, based on her environmental and economic policies. In turn, she dubbed the congressman an elitist for his vote on health care and corporate bailouts.

And so the Conversation with the Candidates on News 12 New Jersey became a labeling contest.

But before the show, the two contestants for the 6th District seat in the House of Representatives exchanged pleasantries, as News 12 graciously arranged for PolitickerNJ to observe on set.

Pallone tactfully called out her Fair Tax plan as a middle class killer.

“The little guy is going to pay the burden,” he said, after corporate taxes are eliminated. “The only ones who will benefit are the special interests.”

She told him he was confused about her plan, that it didn’t add any tax that wasn’t already there.

Little was testy at times: “How dare you accuse me on increasing taxes,” she said.

A Fair Tax will attract corporations, increase tax participation, and spare consignment shoppers, since no tax is levied on used goods.

“If you are thrifty,” she said, “then those people don’t pay any tax at all.”

Pallone hammered home his point: “The wealthy, the corporations, the big interests … pay nothing.”

Pallone distanced himself from the health care bill that he took credit for above other Democratic leaders.

“The health care system is in crisis,” he said, although several aspects of the bill were quite beneficial to his constituents.

Some of those constituents, Little said, told him not to vote for the bill at a town hall meeting last year.

Cost-effectiveness panels and Medicare cuts are hurting the doctors and patients, she said.

Offshore drilling is a moot point locally, Little said. “I’m unaware of any oil resources off the shore of New Jersey.”

Pallone’s retort showed his deeper understanding of the issue. “The fact of the matter is there are some reserves,” he said, and oil companies are pressuring Congress to drill all the time.

Like a good Democrat, Pallone walked her back to Pres. Bill Clinton’s surplus, then pinned the Wall Street collapse and ensuing economic investment plan on Pres. George W. Bush.

Pressured by Republicans, Pallone’s vote for the TARP plan kept America out of a depression, he said, so he pinched his nose and swallowed it.

She said the Bush blame game is “frustrating” and that throwing money at a problem doesn’t solve it.

“The only relief is to reduce government spending,” Little said, dropping constitutional knowledge, like the fact that there are 17 enumerated powers.

She took a swing at the bailouts – “If a business has been mismanaged, they should fail” – and pitched her hands-off business approach that removes nearly all government regulations. Courts will do all of the regulating needed.

Pallone pulled the Credit Card Bill of Rights out of his repertoire and promised more banking reform to show that regulation can be good for consumers.

But the AIG bailout? “We had to stabilize the financial sector,” he said.

He called on a Star-Ledger editorial that wondered whether Little would eliminate Medicare and Social Security, which she said is not her plan.

She wants to abolish the federal Department of Education and let each state run their own show.

Then turning to the Tea Party, Pallone fired: “They’re extremists. They’re (going after) the little guy.”

“Mr. Congressman, I think that you’re the extremist,” she said. “You’re elitist … I feel that you should be ashamed.”

“Tom Moran does not know me,” she said, disparaging Moran’s Ledger editorial for what she saw as inaccuracies, like that global warming is a hoax.

She said science hasn’t proven anything to her and referenced emails that showed manipulation of raw data, drawing a picture of a hoax without saying the word. She called the weather changes, etc. possibly a “cyclical situation.”

Pallone said levels are rising, that is a fact, and the leaders of coastal New Jersey should be aware and active on the problem.

“They don’t believe in the science,” he said. “I don’t know what it will take to convince you.”

The Tea Party has caught attention for some potentially racist behavior nationally, but Little took offense to a question about whether that plays a role for her.

The only connection between one Tea Partier and another is the ideal that inspired the acronym, she said: Taxed Enough Already.

“All you need is for the government to get out of your life,” she said. 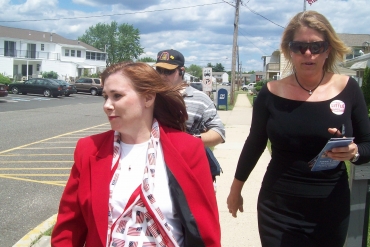