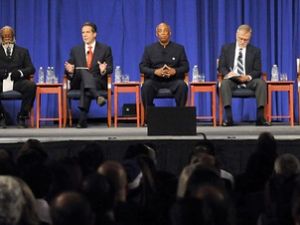 The world was awakened to some of New York’s zany characters–and zanier political parties–at the governor’s debate earlier this month.

But those some of those parties aren’t just fielding candidates for the state’s top job. They are also stacking the ballot on some down-ticket races.

While we don’t think that The Rent Is Too Damn High Party or The Green Party or even the Anti-Prohibition Party are likely to take over state government anytime soon, we do think it would be a lot more entertaining if they did.