CHERRY HILL – All the bottled up frustrations expel suddenly in campaign exhaustion and battle fatigue as U.S. Rep. John Adler (D-Cherry Hill) and Republican challenger Jon Runyan batter each other here in Ponzio’s Diner with one week remaining in their 3rd Congressional District contest, debating everything from cap and trade to Peter DeStefano, to how many donkeys inhabit the Runyan homstead.

Big Talker 1210’s Tom Giordano hosts the debate between the two combatants, whom polls show in a dead heat in this Republican-leaning district that Adler won in 2008 on a wave of Obama love.

“Please don’t boo New Jersey businesses,” cracks Adler on a crest of catcalls when he defends his aye vote on cap and trade in part because, he says, local businesses supported the measure.

Moments later, the congressman weathers a salvo of questions about the shakier moments of his campaign, including the presence of third party candidate Peter DeStefano recruited by Adler allies, and the activities of an Adler operative snapping pictures of Runyan’s home without permission to be on the property.

“I call it a desperate attempt to change the issue,” Runyan says in reference to an early Adler attack ad that objected to the Runyans receiving a farmland tax assessment to ease their tax burden.

The men stand in an open hallway that runs up the middle of Ponzio’s main dining room. People eat their dinner as they observe the two candidates and listen to them.

The candidates handle a question about terrorism and as Adler reminds people that he voted to extend troop levels in Afghanistan, an older man at the bar moans, “I don’t want to hear about that.

To a question about what the race means, Adler says a moment later, “This race will come down to John Adler versus Jon Runyan and who can solve people’s problems. I’m not looking to blame George Bush for the collapse of Wall Street, brought about in part by deregulation.” He badmouths Speaker of the House Nancy Pelosi, admitting disappointment at what he says has been her failure to unite the Congress.

“This election is about the economy because of the direction this Congress and Nancy Pelosi have us headed in,” says Runyan, who seconds later admits he would repeal the healthcare bill even though he didn’t read the bill.

“I’m troubled by that way of thinking,” says the congressman, bewailing his opponent’s oversimplification of the process and what he identifies as a yes or no analytical frame of reference on issues. 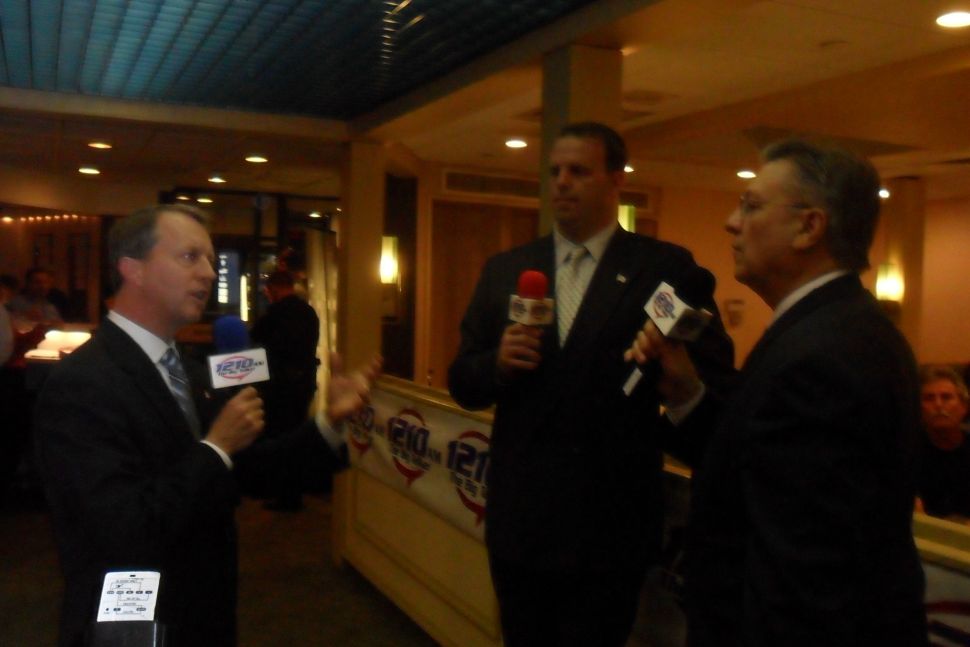