The poll, conducted with 1,037 likley voters between october 22 and 25 has Runyan leading by 5 points, 48% to 43%. A Monmouth University poll released Sept. 30 had Adler leading the race by a slim 3 point margin.

Regarding the Monmouth poll, Runyan has a 50% to 37% advantage among independents, a bloc Adler claimed with a 43% to 32% edge last month. The poll also shows that Runyan has widened his lead in the Ocean County portion of the district to 54% to 37%, and “nearly evened the playing field in Burlington County and Cherry Hill – trailing Adler there by just 3 points, 44% to 47%.”

“There was some concern by Republicans that a so-called Tea Party candidate would hurt their nominee’s chances.  If anything, it may be hurting Adler,” said Patrick Murray, director of the Monmouth University Polling Institute, a reference to self-styled Tea Partier DeStefano, who the Courier-POst sniffed out last month as a plant by the Adler campaign.

The Monmouth poll asked half of the respondents the vote question with DeStefano identified as the New Jersey Tea Party candidate and half received a generic “other candidate” as a third choice.  “Either way it was asked, all third party candidates combined receive no more than 5% of the vote,” Murray said.

Monmouth conducted the poll among 1037 likely voters from October 22 to 25. This sample has a margin of error of + 3.1 percent.

Eagleton’s poll results likewise show a tightening of the race and an evaporation of Adler’s nine-point September lead in that Rutgers-Eagleton Poll.  Runyan now actually leads within the margin of error, 37 percent to 35 percent, with 5 percent for DeStefano. An additional 14 percent of voters undecided, and 10 percent say given the choices, they will not vote.

“This is anyone’s race,” said David Redlawsk, director of the Rutgers-Eagleton Poll and professor of political science at Rutgers. “All along, Runyan has been doing better among likely voters, while Adler held a lead with all voters. But recent events – including the news of Democratic Party involvement in putting DeStefano on the ballot – have moved things more toward Runyan.” 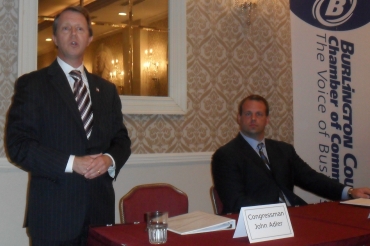