A new internet advertisement out of the Rush Holt campaign features the parents of a deceased veteran advocating for improved mental health care for veterans.

Greg and Linda Bean appear in the ad to talk about their son, Staff Sgt. Coleman Bean, who committed suicide while a member of the Individual Ready Reserve after serving two tours in Iraq.  The couple has known Holt since the Democrat approached them an offered to sponsor a bill in Coleman’s name that would require increased mental health follow-up for members of the IRR.

“What we are really talking about is legislation that will save someone’s life,” said Linda Bean in the 30-second spot.

This is not the Beans’ first exposure to the 12th District campaign, which has heated up in recent weeks as a recent poll showed Holt, a Democratic incumbent, holding only a slim lead.

Greg Bean has accused Republican challenger Scott Sipprelle of dirty tricks in the campaign after a Sipprelle staffer called him in July and tried to coax them into bad mouthing the bill.

Greg Bean, a former newspaperman, said a woman called his house last summer under the guise of wanting information for returning veterans.  He spoke to the woman, who said her husband was a captain serving in Iraq, and offered support and advice.

But Bean said the conversation soon took a strange turn.

“She said things like ‘Don’t you think that (bill) is an insult?’ and ‘Isn’t it a slap in the face to veterans?’” Bean said in an interview last month.  “I asked her why a bill named for my son would be an insult and she said ‘well because it just doesn’t go far enough.”

Bean referred the woman, who he refused to identify because her husband is actually serving in Iraq but who was identified by sources as Marlene Wilden, to his wife for more information.

Linda Bean, suspicious of the woman’s tone and line of questioning, did some research and soon discovered her connection to Sipprelle.

“She was the Middlesex campaign coordinator for Sipprelle,” Bean said.

Bean said he and his wife both called the Sipprelle campaign to complain.  Staffers told the Beans the campaign had nothing to do with the calls.  Eventually Sipprelle himself called to apologize and told the couple the staffer was no longer with the campaign. Bean said the candidate told him that if elected he would take up the charge for veterans issues.

Bean said Sipprelle also denied any involvement in or knowledge of the calls.

But the couple is not so sure.

“Do I have absolute proof that they knew about what she was doing? No, I don’t have absolute proof” Bean said. “But come on, if someone who purports to be your Middlesex County campaign coordinator does something like this than you’re responsible.”

A spokesman for the Sipprelle campaign declined to comment on the incident.  Wilden could not be reached for comment.

The legislation sponsored by Holt has passed twice in the U.S. House of Representatives, but has so far stalled in the senate. 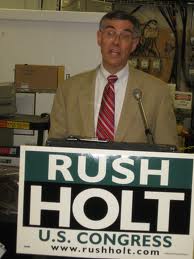