Appointed seven months ago to fill the seat, Goodwin casts Greenstein as a McGreevey-Corzine apologist, while the veteran Greenstein presents herself as an independent Democrat who supported Gov. Chris Christie’s 2 percent cap and opposed Gov. Jon Corzine’s toll roads plan.

“Madison said public debt is a public curse,” Goodwin says. “Linda has been in office for 11 years. Notice how many for sale signs are in your neighborhood. I think Linda’s a very nice person. We’ve been friends for quite a while. But the reality is I don’t think she deserves a promotion.”

“We cut the budget two years in a row and we cut the state work force by 800 people,” says Greenstein. “We absolutely need to deal with reform, but you need a senator who doesn’t vote the party. I don’t vote the party, I vote the issue. Tom is voting in lock step with the governor, right or wrong.”

Greenstein to date has singled out Goodwin’s rejection of the millionaire’s tax, and the Republican here questions Democrats’ political motives regarding the tax.

“If that was such a great tax, why did the Democratic legislature let it expire last year?” asks the pro-marriage, pro-life Goodwin. “It’s really a tax on small business.”

“There were two bills, one on the millionaire’s tax and the other to restore rebates for seniors,” says the pro-choice, pro-gay marriage Democrat ” I totally disagree the millionaires are small business people. We should have a millionaire’s tax. The only reason we didn’t do it was because Gov. Christie, who was getting sworn in, told us not to do money bills.”

“I totally agree that we need to have term limits,” says Goodwin. “Coming from the business world, I see what goes through people’s pain. Term limits are needed because the longer you’re in there, the more you lose your objectivity.”

“I do not support term limits,” says Greenstein. “If you have a good, hard-working legislator, the public can make decisions about who they’re going to work for. I have not lost my objectivity.”

The two candidates field a question about their proudest moment in the legislature. Goodwin says he was proud to sponsor a sexual predator crackdown bill. Greenstein cited her work on the “two strongest anti-pay to play bills” in the state, anti-corruption bills and ethics and campaign finance reform.

“I believe it’s a federal issue,” affirms Goodwin, “but I also believe that those who are here illegally ought to go back where they came from and start the process over again, and do it legally and do it right.”

Sponsored by the Village Grand Civic Association and the West Windsor Senior Citizens, the debate lasts an hour. 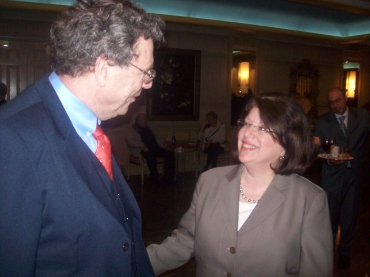