Commissioned by the William J. Hughes Center for Public Policy, the poll shows LoBiondo with the support of 57 percent of likely voters against Democratic challenger Gary Stein, who has 20 percent of the vote. LoBiondo is down two percentage points from the September 21-23 poll and Stein is down five percentage points from the same poll. Undecided voters actually increased over the month from 13 percent to 20 percent.

“Despite the potential upheaval in elections across the country, South Jersey’s three congressional districts are actually following traditional voting patterns. Longtime incumbents, Congressman LoBiondo and Andrews, look likely to be returned to Congress by voters in what are considered safe districts. First term Congressman John Adler, in a traditionally Republican district, finds himself in a toss-up race as he tries for his second term in the House of Representatives,” explained Sharon Schulman, executive director of the William J. Hughes Center for Public Policy at The Richard Stockton College of New Jersey.

“Governor Chris Christie’s favorability ratings remain essentially unchanged from the September poll to the October poll in each of the congressional districts. Christie went from 46 percent to 45 percent favorable in the first district and from 54 percent to 52 percent in the second district. In the third district, Christie did show improvement from 54 percent to 59 percent over the course of the month.” 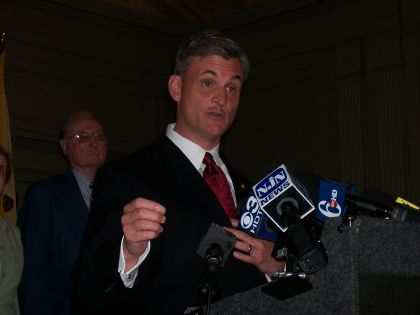