It was over two years ago when Princeton biotech millionaire John Crowley, then the forthcoming biographical star of a movie about his life, stepped aboard a grand old showboat on the Mississippi and addressed a crowd of guests who had arrived on his special invitation.

One Republican in attendance remarked that the scene had James Bond overtones.

But for all the backchannel convention powwows among three power camps about the future of the NJ GOP, and Crowley’s splendid riverboat rollout to make his the most dramatic convention presence: the Keans (the former Governor and his state senator son); the Christies (Todd and Bill Palatucci) and Crowley (the man himself and his right-hand man Bill Spadea), Crowley post Minneapolis receded most quickly from the statewide brightness of politics.

Now Spadea, president of Building the New Majority, said he does not yet know if his friend Crowley will run against U.S. Sen. Bob Menendez (D-Hoboken) in 2012.

Too early. And too many battles between now and then.

“We’ve not had that conversation,” Spadea told PolitickerNJ.com. “We have been discussing the lead-in to 2011. Our consideration now is whether we have done a good enough job building a bench of qualified candidates for local office.”

But Crowley continues to woo the crowd. No riverboat. No spectacular setting.

Just dollars, not big, by any means, but targeted, and just enough to stay connected.

Spadea’s and Crowley’s Republican fundraising outfit contributed almost $30,000 to local and other candidatees in the past cycle, Spadea said. One of the victories that most excited Spadea was that of Sean Kilpatrick in West Deptford, hometown of Senate President Steve Sweeney.

“Our only discussions have been about putting ourselves in the position where the organization is having a positive impact, and I think what we’re seeing in New Jersey is a real legitimate bench ready to take that next step,” Spadea said.

“I know it doesn’t sound like a lot of money,” said Spadea. “But for $500, I can buy several thousand door hangers.”

The news today from Quinnipiac University that Menendez has a 38% job approval rating, Spadea said only, “Aside from who the Republican candidate may be, Senator Menendez will have a much tougher time than he would like.”

According to the state Election Law Enforcement Commission, Building the New Majority had $11,324,62 cash on hand as of mid-October. Crowley personally gave $5,000 to the Republican organization and his wife, Eileen, gave $6,200. Contributions included $500 to Goodwin for Senate and $500 to Donovan. 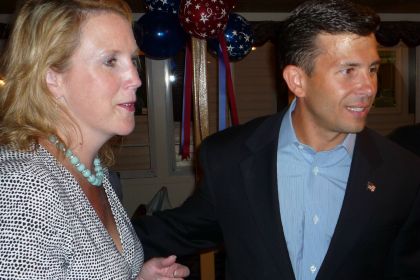