Some Bergen Democrats don’t want to give up an Assembly seat so easily, say sources.

At a meeting of 36th Legislative District players at Bergen County Democratic Organization headquarters in Hackensack last night, Chairman Mike Kasparian and municipal chairs sparred with state Sen. Paul Sarlo (D-Wood-Ridge) on the subject of who should replace former Assemblyman Fred Scalera (D-Nutley), who resigned effective yesterday to take a job in the private sector.

The district is divided three ways: Passaic City, South Bergen and Nutley. South Bergen gets the senate seat and Passaic and Essex counties divide the two assembly seats. Passaic is the most voter-rich town in the district at 20,284, and Nutley is second (17,009).

But South Bergen beats both combined with 57,720, and other Bergen sources in the room – and these included a wary Kasparian – don’t know if they want to hand DiVincenzo another assemblyman without a fight.

The powerful county executive has been subject to a steady pummeling from Democrats worried about the overlord effect that has dogged DiVincenzo’s governmental relationships with Speaker Sheila Oliver, state Sen. Teresa Ruiz and Sen. Nia Gill, all of whom are county payroll underlings.

Why give DiVincenzo another warm body in Trenton in the form of Undersheriff Kevin Ryan, a six figure resident of Nutley, DiVincenzo’s hometown. At least that was partly the argument in the room against Sarlo, who defended the tri-county configuration and an agreement he had with the county executive to keep a Nutley rep.

But there are no women represented in the 36th District came the counter from a faction that wouldn’t mind giving a Statehouse shot to Bergen Freeholder Bernadette McPherson. From the DiVincenzo side: in Essex 50% of the senate representation consists of women, 40% in the assembly.

South Bergen dug in. We don’t want to give the seat to Joe D.

One early answer was to install former state Senate President Carmen Orechio of Nutley, who doesn’t come with county employment chains but who, sources say, didn’t want the job. 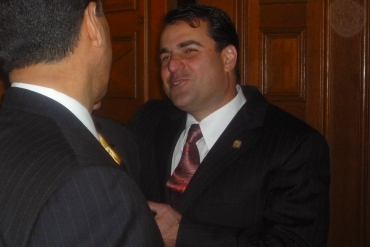