A thousand people attended the Brian P. Stack Civic Association’s party last night at Schuetzen Park in North Bergen and raised money for 15,000 turkeys and thousands of dollars’ worth of holiday toys.

Among Stack’s guests was fellow Democratic Party building block Steve Adubato, Sr., leader of Newark’s North Ward Democrats, who occupied a table with his fellow Newarkers and stayed for over an hour.

When he addressed the crowd, Stack, mayor of Union City and the 33rd District state senator, singled out Adubato for praise, noting the latter’s accomplishments as founder of the Robert Treat Academy in Newark.

“These are real people here,” Adubato was heard to remark later in the packed banquet hall.

Both cross-the-aisle fans of Gov. Chris Christie’s, the Democratic Party bosses repaired to a corner at one point to confer privately.

This Saturday, Stack and his followers will mobilize in Union City to deliver turkeys door to door in time for Thanksgiving. 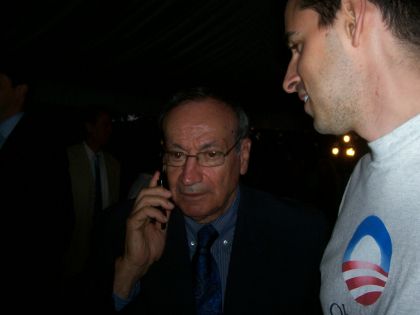