Mayor Cory Booker announced today that the City of Newark must lay off 167 police officers effective on Tuesday, Nov. 30, in response to the refusal by the Fraternal Order of Police union’s leadership to put the City’s one-year counter proposal to a vote by the union’s entire membership.

Booker said the rejection contradicts public statements made on Saturday, November 20, by FOP brass that it would put the proposal to a vote by its entire membership. According to the mayor, the city’s one-year counter proposal would have eliminated raises, uniform allowance, stress pay, and reduced overtime, replacing it with non-paid time off, for the 167 police officers affected by the layoffs.

In addition, the mayor said Newark’s counter proposal called for $3.7 million savings through 10 days deferred pay, a $1.2 million reduction in overtime, and $1.9 million savings in a giveback of five days pay. The counter proposal also called for officers subject to the layoff to give back a total of $2.71 million in concessions on uniform allowances, stress pay, and overtime, which was originally part of a prior FOP proposal. The city is expected to save approximately $9.5 million through this proposal, which would have prevented the layoffs and helped close Newark’s projected 2011 budget gap.

“Other communities across the state and nation have called upon their police unions to share the pain of this economy through even more significant concessions. Many of those police unions have answered that call, but the leadership of the Newark FOP has failed its membership and the citizens of Newark. The decision made by the Fraternal Order of Police leadership will force the City to lay off 167 dedicated police officers effective November 30,” said Booker. “The proposed concessions impacted a fraction of the FOP membership’s pay and benefits, a small sacrifice to make to keep their fellow officers on the job. I asked the union leadership to let their entire membership vote on the counter proposal that was on the table, and after agreeing to do so, they did not follow through. We are in a very painful period for the City, the state, and the nation as a whole, as we navigate the weakest economy in over 70 years. Every City employee is making profound sacrifices, and the only group that has made no concessions is the Fraternal Order of Police.” 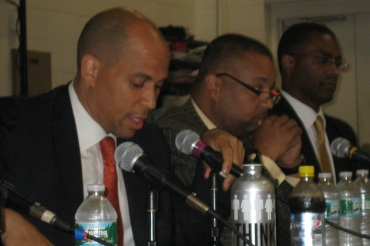