NEWARK – There’s “massive restructuring” of government in the city of Newark, a polite way of saying that up to 500 people could be losing their jobs soon including 167 police officers, Mayor Cory Booker said at a press conference Tuesday.

“In the last seven days (we’ve been) begging the (police) union to talk to us,” Booker said. “Everything was on the table.”

The police union is inflexible, Booker said, and its leadership is willing to sacrifice jobs of officers to preserve the current contract rights of those who remain – pay increases, benefits, and paid leave.

Police Director Garry McCarthy said the police force found $6 million savings in his budget of a targeted total of $17 million.

Looking for concessions – worst case, layoffs – McCarthy said the union made an offer, declined a counteroffer, then stepped away from the table.

The city asked for five unpaid days of leave from each officer, Booker said, but the union turned it down. It could have saved officers, or even half of the officers, if there was a dialogue.

The other unions were given the same spiel, and the white-collar workers’ union is also facing layoffs, according to Acting Business Administrator Julien Neals.

Between 400 and 500 employees will be laid off, unless the unions come back with real savings for the city.

Booker hopes to reduce the structural deficit of the city to $40 million by 2011.

“If we allowed our police department to go to binding arbitration, we would have had a worse deal,” Booker said.

The prospects of facing binding arbitration with the police union – 3, 4, or 5 percent raises are the norm, Booker said – are untenable for the city.

If arbitration reform was in place, Booker said, the city might not be laying off all these cops.

He asked for “immediate help with the toolkit at the state level,” consistent with his early backing of Gov. Chris Christie’s reform package that is promised to be heard in the legislature before the end of the year.

A court-ordered continuation of negotiations between the union and the city is ongoing, but the wheels of the layoff plan are in motion.

Booker said the city wasn’t just cutting cops and hoping for the best; they are seeking equipment and technology funding to modernize the force and teaming with social scientists to combat gang violence with operation “Cease Fire.”

These are innovative second choices, Booker said. Saving dedicated undercover police officers – “the most dangerous work in all public safety” – was priority number one. 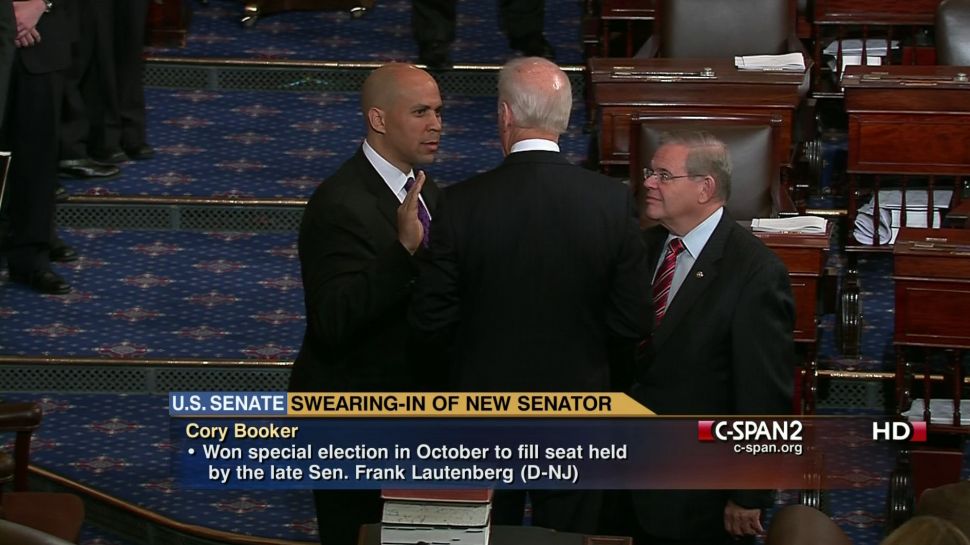