The feds are acting on a complaint stemming from a bruising contest between veteran incumbent Mayor James Cahil and his defeated challenger, attorney Patricia Bombelyn, say sources familiar with the probe.

In one instance, there was a street encounter between Cahil and Bombelyn forces caught on video.

Bombelyn campaign worker Gideon Weisberg told a superior court judge that mayor’s aide Kevin Jones assaulted him after Weisberg filmed Jones handling sealed mail-in ballots that had not yet been eyeballed by the voters themselves, Weisberg said.

There were also other campaign flashpoints in Cahill v. Bombelyn, which may or may not be related to the federal probe.

During the campaign, retired police officer Richard Rivera, a Bombelyn ally, demanded an investigation into police officers’ residency designations in the city.

In a June 4th letter to New Brunswick Police Department Lt. Christiopher Carroll, Rivera asked whether officers intentionally maintain their voter registration in New Brunswick and vote in local elections despite the fact that they live in other municipalities.

“It has been brought to my attention that this is a widespread practice among your officers which could probably be remedied with a departmental memorandum to personnel,” Rivera wrote. “Prior to forwarding this complaint to you I sought to personally confirm some of these allegations using public information and by visiting several residences.”

A 20-year incumbent, Cahil easily defeated Bombelyn, 65-35% in the Democratic Primary, and faced no Republican opposition in the general.

“The Federal Bureau of Investigation was in the Middlesex County Clerk’s Office and the Board of Elections Office on Nov. 16 seeking information on the June Primary election in New Brunswick.  County officials are cooperating fully with the request the FBI has made.” 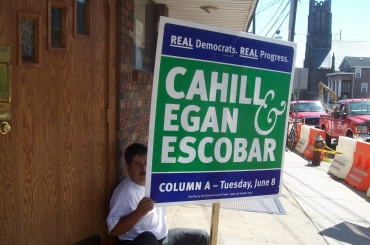