HACKETTSTOWN – Gov. Chris Christie today cut through the pink edges of New Jersey to declare at the blood red core of Warren County that TSA screenings as currently implemented are inappropriate.

“I support TSA trying to keep us safe, but not the way they’re doing it – it’s too invasive,” the governor said in response to a question at his packed morning town hall.

“That’s a sign of consensus in America,” cracked the governor in reference to the liberal ACLU and Doherty, arguably the most conservative member of the senate, who sat onstage behind Christie.

Standing onstage at American Legion Post 164 as he considered other issues of the day, including his education and toolkit budget reform proposals and the Highlands Act, Christie good-naturedly gattle-gunned the Democratic legislature before a doubled-over crowd.

“The only people who don’t get it are Democrats in the legislature,” said the governor, who rattled off a list of bills the legislature is scheduled to consider this afternoon. “They would rather consider a bill allowing schools to sell advertising on the sides of school buses then address education and pension reform. …They don’t want… reform… but those foreign-made dentures are a hazard to your health.”

Teacher merit pay anchored Christie’s remarks, and he used the arms length presence of Doherty and Assemblyman Erik Peterson to make a point about ineffectual educators and the system that protects them.

The ordinarily implaccable Peterson cracked a grin as giggles broke into laughs.

“If you ran a business like that, you’d be out of business,” said the governor, who urged legislators to pass merit pay for teachers to “reward the good ones and fire the bad ones.”

One of several hearty “yeahs” puntuated the resulting applause.

With 29 days to go before the legislature breaks for the year, Christie invited people here to dial up Senate President Steve Sweeney (D-West Deptford) and Assembly Speaker Sheila Oliver (D-East Orange) to impress upon Democratic leadership the impotance of property tax reform.

A child moments later asked the governor if he would consider backing property tax relief for homeowners who home-school their children.

In response to queries about whether or not he intends to reform the Highlands Act, Christie didn’t deny its environmental benefits, but called the McGreevey-era law a failure economically because it does not justly compensate homeowners who cannot develop their land.

On this point and others, Christie stressed the importance of next year’s legislative elections and the opportunity for Republicans to gain a majority to implement what the governor said would be “common sense.” 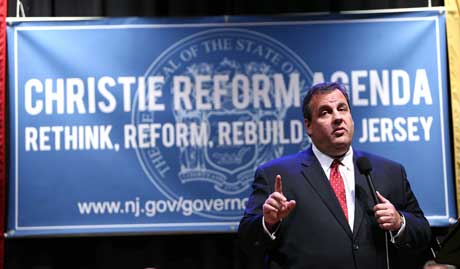